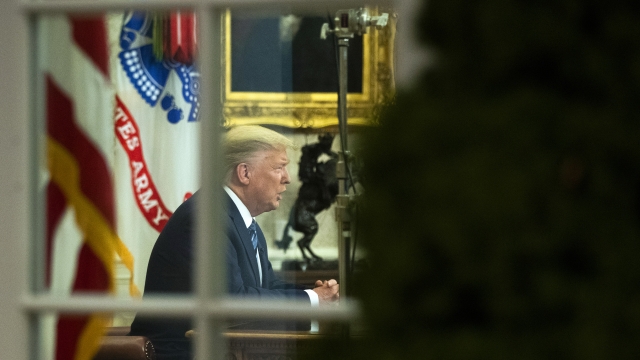 SMS
Report: U.S. Officials Started Briefing Trump On Pandemic In January
By LeeAnne Lowry
By LeeAnne Lowry
March 21, 2020
By the start of February, most of the president's daily intelligence briefings were on the serious threat of coronavirus, The Washington Post reports.
SHOW TRANSCRIPT

U.S. intelligence agencies began briefing President Donald Trump about the threat of a pandemic in January, according to a report from The Washington Post on Friday.

The newspaper said the president's daily intelligence briefings by the start of February became heavily focused on the serious threats of the coronavirus to the U.S. Officials didn't predict when the virus might hit the nation or say what should be done about it. But The Post noted that those issues would be "outside the purview of intelligence agencies."

An intelligence official told The Post, "the system was blinking red" but "they just couldn't get him to do anything about it."

At a press conference Saturday, President Trump disputed the claim, saying he took action as soon as he learned. He said China withheld the information about the virus until recently.

He said, "Tony Fauci, and all of the people, the talent that we have, would have loved to have three or four months of additional time if you knew that this was going to be happening. They didn't have that time. They read about it in newspapers like everybody else."