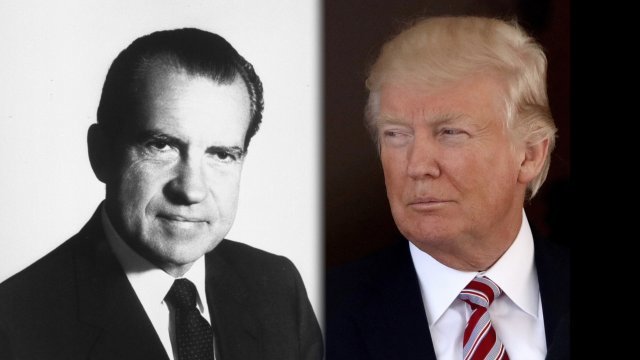 For example, when he said: "North Korea best not make any more threats to the United States. They will be met with fire and fury like the world has never seen."

Or the time he announced: "The United States has great strength and patience, but if it is forced to defend itself or its allies, we will have no choice but to totally destroy North Korea. 'Rocket Man' is on a suicide mission for himself and for his regime."

And North Korea has matched Trump's comments each step of the way: The country's foreign minister recently accused Trump of declaring war. But behind the scenes, North Korean officials are reportedly trying to gauge how serious Trump actually is.

North Korean officials have sought advice from former U.S. diplomats, members of conservative think tanks and Americans with ties to the Republican party, according to The Washington Post. 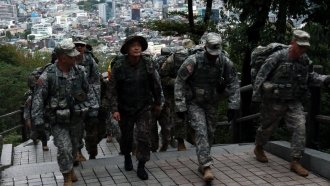 Fake Evacuation Alerts Were Sent To Some Americans In South Korea

The Post reports those North Korean officials have asked about Trump's military agenda for the region, and about why his statements sometimes contradict those of Defense Secretary Jim Mattis and Secretary of State Rex Tillerson.

Historically speaking, we've seen this effect before. It's part of what's been dubbed the "madman theory."

The strategy was President Richard Nixon's way of dealing with the Soviet Union and North Vietnam during the Cold War, specifically the Vietnam conflict. He wanted to make it seem like he would do anything to get what he wanted — even order a nuclear attack.

And that's what he did. Kind of.

The pinnacle of Nixon's "madman" tactic was called Operation Giant Lance. American bombers loaded with nukes spent three days circling just outside of Soviet airspace. The order coincided with a deadline Nixon had given the North Vietnamese — and, by extension, their Soviet allies — to show some sort of progress in peace negotiations.

Nixon's tactic wasn't all that effective in spurring negotiations — not to mention that it was an incredibly risky bluff. What it did do, though, was leave the Soviets with a feeling of uncertainty about what the U.S. president would do next.

North Korean leaders view the country's nuclear program as key to its survival. That's not likely to change under Trump's administration, no matter what he says next.