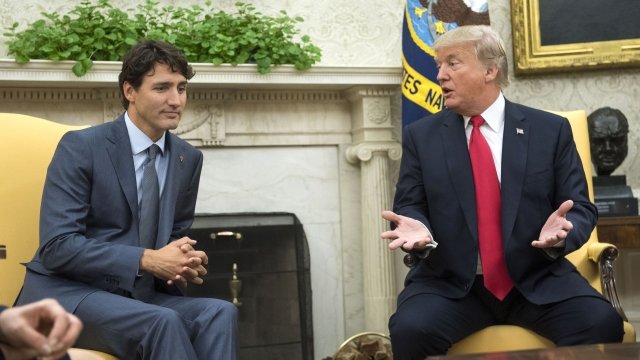 SMS
Trump Reportedly Says He Made Up Facts In Meeting With Justin Trudeau
By Lindsey Pulse
By Lindsey Pulse
March 15, 2018
President Donald Trump reportedly said he told the Canadian prime minister the U.S. has a trade deficit with Canada despite not knowing the truth.
SHOW TRANSCRIPT

The Washington Post obtained audio from the speech. The outlet reports Trump told Trudeau that the U.S. has a trade deficit with Canada, even though Trump "had no idea" if it was true.

Trudeau countered Trump's claim, emphasizing there is no deficit. Trump insisted Trudeau was wrong and instructed staff to verify the information because he "couldn't believe it."

Trump says he admitted Trudeau was right about the deficit but that it "doesn't include energy and timber." According to the U.S. trade representative office's most recent data — from 2016 — the U.S. had a trade surplus with Canada that year.