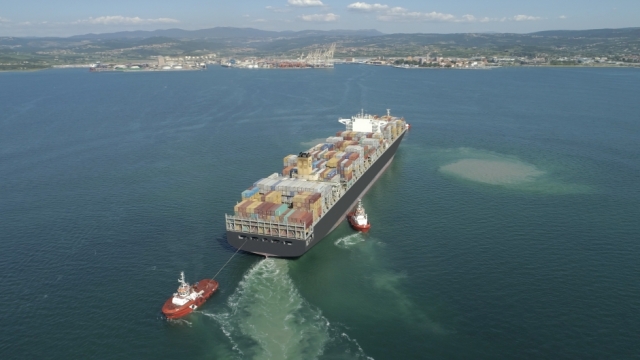 The devices extract sulfur from the exhaust of ships that run on heavy fuel oil, but they just pump that sulfur into the sea.

Ships are being rigged with "cheat devices" that bypass new U.N. environmental rules. Companies are complying with the law in that they aren't releasing pollution into the air, but according to The Independent, they're dumping pollution into oceans instead.

The devices are called open-loop scrubbers. They extract sulfur from the exhaust fumes of ships that run on heavy fuel oil — that's in compliance with International Maritime Organization standards that will begin on Jan. 1. But here's the problem: Instead of being stored and safely dumped later, the sulfur is just rerouted and pumped into the surrounding water. That not only increases the amount of pollutants being pumped into the ocean, but it also increases CO2 emissions.

DNV GL, the world's largest ship classification company, told the Independent nearly 4,000 ships already have the devices installed. The International Council on Clean Transportation estimates cruise ships that have them will consume around 4 million tons of heavy fuel oil in 2020 and discharge 180 million tons of contaminated scrubber washwater overboard.

Another version of the device, the closed-loop scrubber, stores extracted sulfur in tanks that can be discharged at a safe disposal facility in a port. But according to the Independent, only 23 out of the nearly 4,000 ships have that version installed.

The ICCT says for every ton of fuel burned, ships using open-loop scrubbers are emitting about 45 tons of warm, acidic, contaminated washwater containing carcinogens and heavy metals. Those substances have been connected to central nervous system damage in both humans and animals and cancers including skin, lung, bladder, liver and stomach.

Scientists have warned that damage to the ocean could be disastrous to the rest of the planet. For example, rising ocean temperatures and chemical changes are disrupting entire ecosystems and the people who depend on them. Ocean warming reduces mixing between the layers of water, and therefore, the supply of oxygen and nutrients for marine life as well.

The Intergovernmental Panel on Climate Change says the ocean has already absorbed more than 90% of excess heat in the climate system,

which has resulted in sea level rise. It's also absorbed about 30% of human-induced CO2 emissions since the '80s, which has made it more acidic.

Some countries have developed bans on the scrubbers or their discharge, and some have called on the IMO's Marine Environment Protection Committee to make more regulations around it. The committee told The Independent that it's already "adopted strict criteria for discharge of washwater from exhaust gas cleaning systems" and that it's "undertaking a review of the 2015 guidelines on exhaust gas cleaning systems," which includes washwater discharge standards.