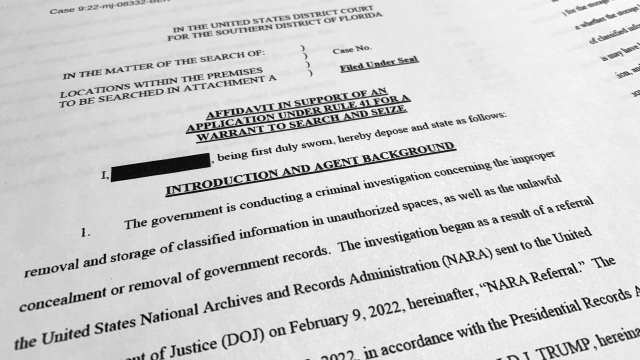 A bombshell report from The Washington Post reveals that some of the documents the FBI seized during its raid of former President Trump's Mar-a-Lago resort contained top-secret nuclear information that many senior government officials don't even have clearance to view.

According to The Post, a document describing a foreign government's nuclear capabilities was among top-secret information seized by the Justice Department. It's unclear exactly which foreign power the document is referring to.

The Justice Department has since opened a criminal investigation focused on what it says were efforts by Trump over several months to obstruct the investigation into those documents.

Meanwhile, a federal judge on Monday granted a request by the former president's legal team to appoint a special master to review those seized documents, temporarily halting the Justice Department's use of the records for investigative purposes.

The decision by U.S. District Judge Aileen Cannon came despite the objections of the Justice Department, which said an outside legal expert was not necessary in part because officials had already completed their review of potentially privileged documents.

The appointment is likely to slow the pace of the department's investigation but it is not clear whether it will have any significant effect on any investigative decisions or the ultimate outcome of the probe.