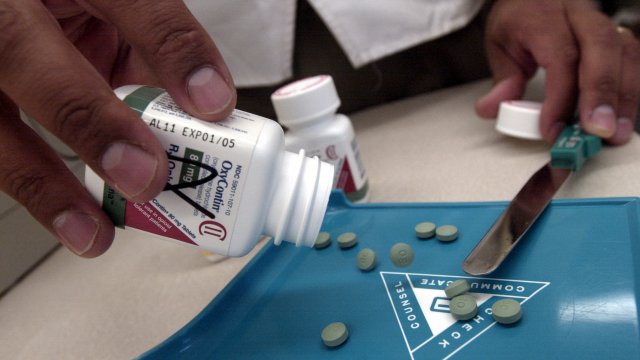 Two congressional leaders say the maker of OxyContin influenced some of the World Health Organization's guidelines on pain.

Reps. Katherine Clark and Hal Rogers released a report Wednesday outlining allegations that Purdue Pharma leveraged relationships with groups and individuals to manipulate the WHO's opioid guidance. They say the guidance contains misleading statements about the drugs' safety and parallels information in Purdue's marketing materials.

They're referring to opioid guidelines from 2011 and 2012, which were written after the WHO sought input from 21 different relevant organizations. Clark and Rogers say it included input from some groups known to be financially linked to the opioid industry.

Those guidelines contain claims like: opioid dependence happens in less than 1% of patients; and there's "no specific or maximum" opioid dosage for children. Neither of those claims is accepted by the medical community.

On top of the report, Clark and Rogers also wrote a letter to the WHO's director-general indicating that the organization's guidance downplays opioids' addictiveness and is effectively "promoting the chronic use of opioids." It also says members of Congress didn't receive a response to a 2017 letter they sent to the WHO about the opioid crisis, triggering the investigation into the pain guidelines.

But in a statement to Newsy, the WHO said its records show that an official *did reply to Congress' original letter, and that it's reviewing the new report "point-by-point."

Purdue Pharma told Newsy that it "strongly denies" the claims in the report and that the company is "solely based in the United States with no international operations. [It] has never violated any applicable rules or guidance and no formal complaint or enforcement activity has resulted from Purdue's financial support or relationship with any third party."

Purdue's spokesperson also noted that a lawsuit was recently dismissed in North Dakota when a judge ruled the company's labeling did comply with FDA guidelines.

The pharmaceutical company is currently facing more than 1,000 legal battles over allegations that its marketing practices were deceptive and helped fuel the national opioid epidemic. Purdue has denied any wrongdoing.

The lawmakers are asking the WHO to rescind the two guidelines in question and issue a global warning about why they shouldn't be followed.