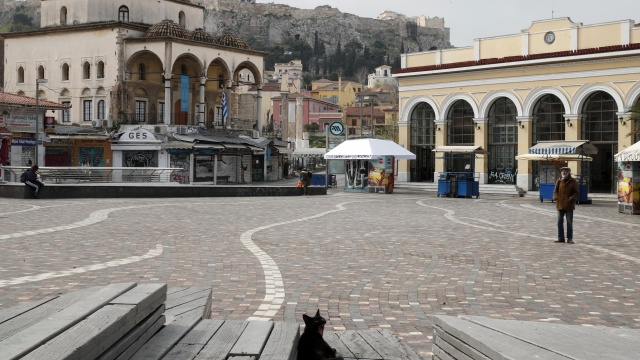 SMS
Report: EU Economy Facing Historic 'Shock' From Coronavirus
By Peter Hecht
By Peter Hecht
May 6, 2020
European commissioner for the economy says, "Europe is experiencing an economic shock without precedent since the Great Depression."
SHOW TRANSCRIPT

The European Union is facing an historic economic collapse that could financially devastate nations this year and result in an uneven recovery going forward.

That's according to the forecast offered Wednesday by the European Commission, the EU's governing body.

Paolo Gentiloni, European commissioner for the economy, offered this grim assessment in a virtual news conference from Brussels. He said: "Europe is experiencing an economic shock without precedent since the Great Depression."

The Commission's announcement comes as countries, including Italy and Spain, are slowly easing restrictions amid significant reductions in rates of coronavirus infections and deaths.

But economic activity for the EU's 27 countries is expected to fall by 7.4 percent this year, a big drop from predicted growth of over 1 percent.

The Commission says it expects improving economic tides in 2021. But Gentiloni says: “Both the depth of the recession and the strength of recovery will be uneven."

Until recently, Greece was recovering from a decade-long financial crisis. Now the European Commission says its fragile economy will take nearly a 10 percent hit this year, with unemployment reaching 20 percent.

Italy's 2020 forecast calls for a 9 1/2 percent decline and a deep recession. Spain is expected to take a similar hit. Economic activity may shrink by more than 8 percent in France and 6 percent in the EU's robust market, Germany.

And the effects may be sweeping. The EU is a major trading partner for China and the United States.