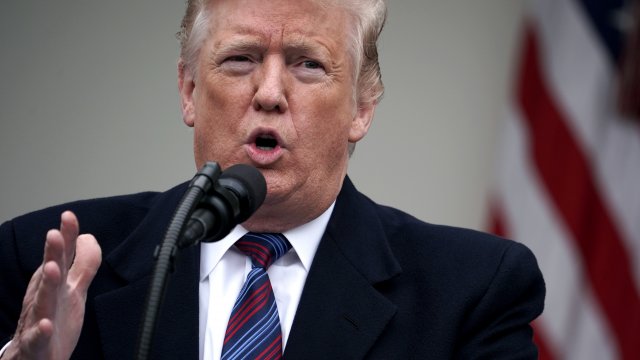 SMS
Report: DHS To Begin Sending Asylum-seekers To Mexico To Await Rulings
By Alec Larson
By Alec Larson
January 24, 2019
Citing unnamed officials, multiple outlets report some aslyum-seekers will have to wait out their cases in Mexico starting Friday.
SHOW TRANSCRIPT

Starting Friday, Customs and Border Protection will reportedly begin sending some asylum-seekers back across the southern border to Mexico to await decisions in their cases. Citing unnamed U.S. officials, NBC News reports the policy is meant to halt immigration by Central American families.

The policy would reportedly only affect migrants at San Diego's San Ysidro crossing — the nation's busiest, and one that's been frequented by asylum-seekers from a Central American caravan that arrived in November. According to The Associated Press, the policy could potentially be expanded to other crossings.

Under existing policies, asylum-seekers are asked to complete a "credible fear" interview in order to potentially stay in the U.S. while their cases are sent to immigration judges.

The policy reportedly taking effect Friday will not apply to asylum-seekers from Mexico or to children who are traveling alone.