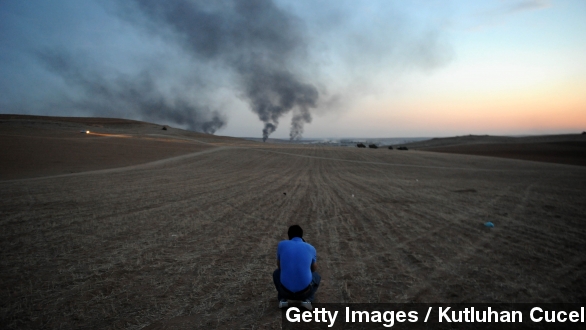 SMS
Report Details ISIS Abuse And Torture Of Child Hostages
By Jake Godin
By Jake Godin
November 4, 2014
A new report has provided more information on the condition of child hostages held by ISIS after some escaped in June and spoke of torture and abuse.
SHOW TRANSCRIPT

Middle Eastern militant group ISIS is reportedly not only taking children hostage, but a new report details they're abusing and torturing them too.

The report, released Tuesday by Human Rights Watch, consists of stories by four Kurdish children from the besieged city of Kobani who were taken by ISIS five months ago and only recently set free.

According to the report, there were a total of 153 Kurdish boys between the ages of 14 and 16 who were kidnapped on a return trip to Kobani. ISIS released around 100 girls who were traveling with the boys within a few hours of their capture.

The interviews describe situations where ISIS beat children with electric cables and hoses for doing poorly in required religious lessons, trying to escape or doing anything the guards saw as misbehaving. In some cases, Human Rights Watch says the boys were put in tires and beaten. (Video via YouTube / Foukoul Hani Rif & YouTube / أبو مصعب الغزي)

The four children from the report say they weren't given any explanation for why they were released aside from finishing their religious training. They were then given 150 Syrian pounds, a little less than one U.S. dollar and a religious DVD.

Earlier in June, both CNN and The Guardian had interviewed boys from this same group who had escaped. Their descriptions seem to match up with this latest report.

IVAN WATSON VIA CNN: "They're woken up before dawn and subjected to hours of radical Islamic theologic teachings. Then, at night, fighters come in and show them violent videos..."

The boy interviewed by The Guardian described their captors as international consisting of Russian, Chechens, Libyans, Syrians and Saudi Arabians — something the boys from this latest report noted as well.

The city of Kobani, or Ayn al-Arab in Arabic, has made headlines the past month for being a key strategic site on the Syrian-Turkish border with local fighters refusing to give up what parts of the city they still control to ISIS militants. (Video via YouTube / Azad Mêrdîn)