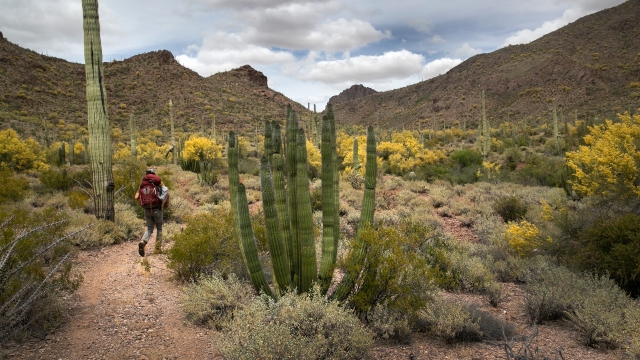 SMS
Report: Border Barrier Could Damage Archaeological Sites In Arizona
By Ahmed Jawadi
By Ahmed Jawadi
September 18, 2019
​According to National Park Service report, up to 22 archaeological sites ​in Arizona are at risk of being destroyed by border wall construction.
SHOW TRANSCRIPT

The construction of the border wall along the southwestern border could threaten nearly two dozen archaeological sites in Arizona, according to a new report.

According to an internal report by the National Park Service and obtained by The Washington Post, up to 22 archaeological sites in Arizona's Organ Pipe Cactus National Monument face being "wholly or partially destroyed by forthcoming border fence construction." It also says the administration’s plan to turn an existing 5-foot barrier in the area into a 30-foot steel wall could damage ancient artifacts, like stone tools and ceramics, that have yet to be discovered.

The report notes that "human groups have been present" in the area for over 10,000 years, and at least a dozen Native American tribes claim connections to the lands within the Organ Pipe.  Despite the park being both a U.S. National Monument and UNESCO biosphere reserve, the Department of Homeland Security was able to waive more than three dozen federal laws to build the border wall, including the Archaeological Resources Protection Act, the Native American Graves Protection and Repatriation Act and the Endangered Species Act.

Customs and Border Protection officials told the Post that the agency has been "working very closely" with the park service, but has not delayed construction plans to allow for more detailed excavations in the area.