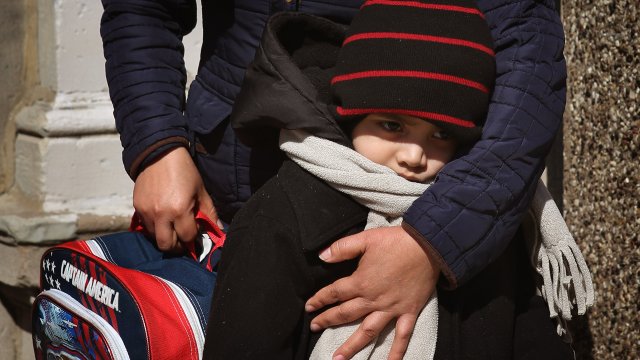 For years, researchers and policymakers have framed disparities in education as a mostly economic issue — rich versus poor. But a new report from education nonprofit EdBuild found there's a $23 billion discrepancy between predominantly white school districts and predominantly nonwhite ones.

That breaks down to a difference of about $2,200 per student and $44,000 per classroom. In the most extreme cases, that number is much higher. In Arizona, for example, predominantly white school districts received $7,600 more per student than nonwhite districts.

Rebecca Sibilia has spent her entire career in education. She believes the common practice of viewing education funding purely as a poverty problem may not be enough to close the gap.

"By and large, we see that states are actually sending more money to low-income communities. So the state formula itself is working, but they can't keep up with the gaps. So our question was … knowing that the states are sending more money to high-poverty districts generally, is that equally benefiting school districts by race? And what we found is that it's not," Sibilia said.

In a further analysis of this issue, EdBuild found poor white school districts receive about $150 per student less than the national average. But compared to their poor nonwhite counterparts, those high-poverty districts are still out in front by a staggering $1,500 per student.

Sibilia points to historic segregationist housing policies that have preserved a separate and unequal education system. Practices like redlining led to racially segregated school districts, and the EdBuild report points out that even today, mostly white districts enroll far fewer students than mostly non-white ones. Sibilia believes that because the housing policies that helped create this problem were based on race, the solutions may need to (at least in part) be based on race as well.

Sibilia said: "I think that particularly for school funding, one of the reasons that we don't talk about race is not necessarily because we don't want to take it on, but it's because our funding system is so inherently tied to the wealth of a community. … But once you enter the equation of the states having to make up the gap, that's when you get to ask the question: Is the state's funding formula actually working for all kids?"

Some of the best examples of how to make education funding more equitable across racial lines come from states like Georgia and Alabama, which have especially large school districts. Because these districts are so big, they're inherently more diverse, both racially and economically, and that allows for a more equal distribution of funds overall.

This concept of "wealth sharing" in education is a controversial one, but something that Sibilia believes is necessary to eventually close this $23 billion gap.

"It's really important for folks to start to disentangle the idea of being able to govern your schools locally versus funding your schools locally. You can still have your own school board, you can still elect a superintendent, you could still have your own football team. But that doesn't mean that you have the right to keep all of your wealth for your kids. And so I think that we need to start having a conversation about that as a society. And once we get used to that idea, then we really need to start talking about broadening up our tax base and sharing money amongst all of our kids," Sibilia said.