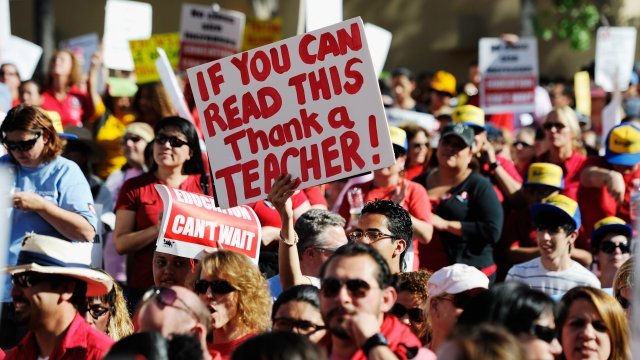 Nearly one out of five full-time teachers works a second job. That's according to a report by the National Center for Education Statistics out Tuesday.

A study of the 2015-2016 school year found 18 percent of teachers also worked somewhere other than their classrooms. The results were fairly consistent nationwide — and may not be surprising.

They come following protests over low wages and inadequate school funding by teachers across the U.S.

In April, Oklahoma public school teachers, whose salaries were ranked 49th in the nation in 2016, ended a nine-day walkout. They didn't return to work until lawmakers promised millions in education funding and gave teachers the largest raise in state history.

But before the walkout, teachers in Oklahoma hadn't received a raise in a decade.

In the past, full-time teachers have reported working as janitors, Lyft or Uber drivers and retail workers for additional income.