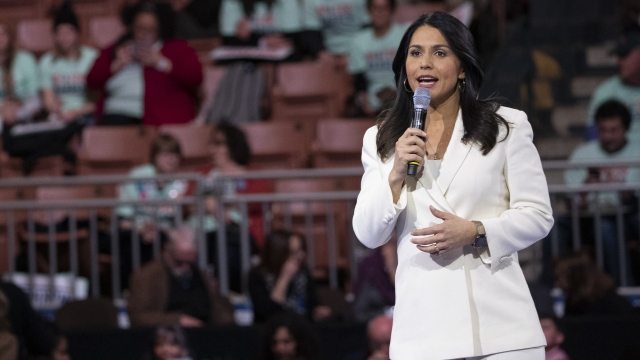 There's one less Democrat running for president: Rep. Tulsi Gabbard is out of the race.

In the early days of her campaign, the congresswoman from Hawaii struggled to break out from the crowded field of candidates. She qualified for four rounds of the Democratic debates, but didn't see much momentum after those appearances.

Gabbard was one of just two candidates with a military background. In fact, she is still an active member of the Hawaii National Guard. Her military service influenced her decision to make war and its costs a central focus of her campaign.

"The leadership that I bring will allow us to have a foreign policy that's based on cooperation rather than conflict, working out our differences with other countries without pushing us constantly to the brink of war," Gabbard said.

But her campaign was not without controversy. She had a public spat with Hillary Clinton. During a podcast interview, the former secretary of state implied that Gabbbard was a "favorite of the Russians." The congresswoman responded by filing a defamation lawsuit against Clinton. Gabbard also complained about news coverage of her, saying she was hampered by a "media blackout."

Gabbard has been a member of Congress since 2013. But in October last year, she said she would not simultaneously run for Congress in Hawaii and for president. Her congressional term ends in January 2021.