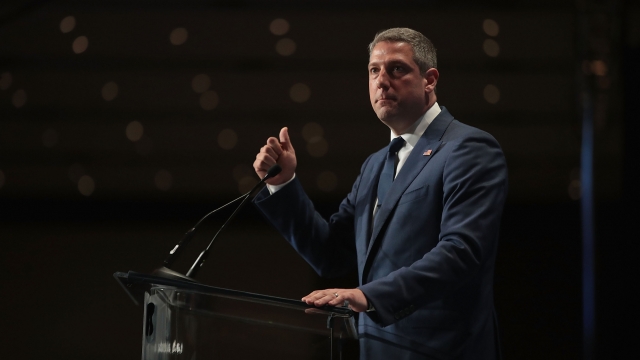 SMS
Rep. Tim Ryan Drops Out Of 2020 Presidential Race
By Alec Larson
By Alec Larson
October 24, 2019
In his announcement, Ryan said that he would seek reelection to the House of Representatives.
SHOW TRANSCRIPT

In a video posted on Twitter on Thursday, Ryan told supporters he'd head home to Ohio with the intention of running for reelection in the House.

He said: "I wanted to give voice to the forgotten communities that have been left behind by globalization and automation, and I'm proud of this campaign because I believe we've done that. ... While it didn't work out quite the way we planned, this voice will not be stifled."

Ryan, who was elected to Congress in 2002, qualified for the first two Democratic primary debates while running on a platform that aimed to spotlight the Midwestern working class.

But his campaign struggled to raise funds. It only took in about $426,000 in the third quarter of 2019, a number that paled in comparison to the tens of millions his competitors raised. And after failing to qualify for the third and fourth Democratic debates, his chances at the nomination were close to zero.

He has until Dec. 11 to file to run for reelection in Ohio's 13th District, which he won easily last year.