Scalise Is Still In Critical Condition, But Doctors Are Optimistic 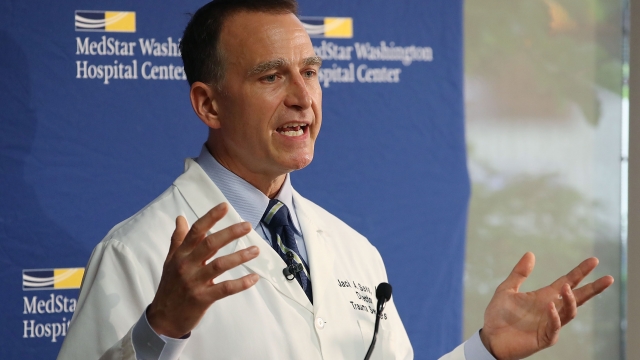 After almost two days in the hospital, Scalise's doctors are optimistic.

Rep. Steve Scalise is improving but is still in critical condition, according to an update from his doctors.

MedStar trauma director Jack Sava says Scalise sustained damage to his bones, internal organs and blood vessels. He also says that Scalise received many units of transfused blood for hemorrhaging. The congressman is still in critical condition in the ICU, but his doctors are staying optimistic.

"We are encouraged by improvement in his condition over the last 36 hours. We have controlled the internal bleeding, and his vital signs have stabilized," Sava said at a press conference.

Scalise will need more operations for his injuries, but doctors can't yet predict how many are necessary.

The shooting at an early morning GOP baseball practice raises questions about security for members of Congress — especially rank-and-file members.

U.S. Capitol Police Officer Crystal Griner, who was shot in the ankle, is reported to be in good condition. Officer David Bailey recovered enough to throw the first pitch at Thursday's Congressional Baseball Game.

Scalise's doctors estimate the congressman will be recovering in the hospital for the next couple of weeks.