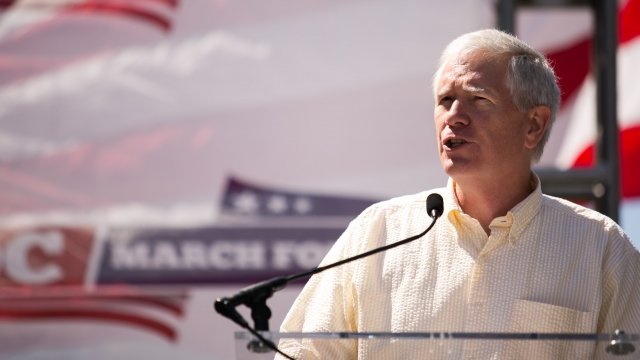 During a hearing earlier this month in the House Science, Space, and Technology Committee, Rep. Mo Brooks made a claim about how much climate change affects antarctic ice, and it's just not accurate.

"Would it surprise you to know that as global temperatures rise, assuming for the moment that they do, that that actually increases the amount of ice that is collected in Antarctica?" Brooks said.

"That's not true — well, I made a trip down there to Antarctica and met with National Science Foundation scientists, and they all agreed with global warming, and they emphasized that you're going to have an increase in the amount of ice in Antarctica because of global warming," Brooks responded.

OK, so before we get into the nitty gritty here, we should establish that it's absolutely not true that rising temperatures result in more overall ice in the antarctic. As temps climb, ice melts, and that's as true in Antarctica as it is anywhere else in the world. Most scientists agree that climate change will result in a shrinkage of antarctic ice overall.

That said, what Brooks is alluding to, and what he later explains in the hearing, is that as the atmosphere gets warmer, it can hold more moisture, which means more precipitation in Antarctica. Since it's so cold, that precipitation freezes, which means ice builds up in some places.

But that doesn't mean the net ice volume in Antarctica is climbing. The buildup is vastly outweighed by the amount of ice melting elsewhere on the continent.