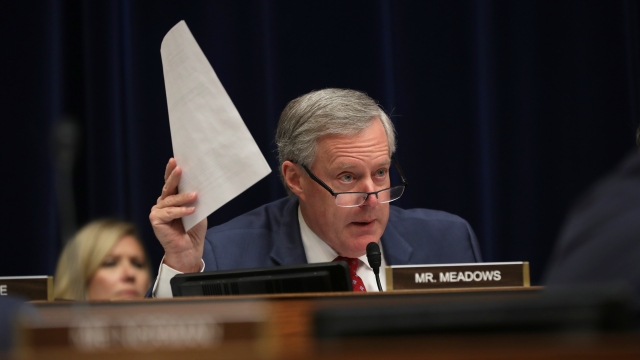 Meadows started the hearing by requesting that Cohen's testimony be delayed, claiming Cohen purposefully turned in his prepared statement late.

"Now if this was just an oversight, Mr. Chairman, I could look beyond it, but it was an intentional effort by this witness and his advisers to once again show his disdain for this body. And with that, I move that we postpone this hearing," said Meadows.

The request was denied. But Meadows' frustration with the hearing and with Cohen was pretty clear in his line of questioning.

During his opening statement, Cohen called the president a racist. Meadows pushed back on the claim by bringing out Trump administration staffer Lynne Patton, who is black.

"She says as the daughter of a man born in Birmingham, Alabama, that there is no way she would work for an individual who is racist. How do you reconcile the two of those?" Meadows asked.

"As neither should I, as the son of a Holocaust survivor," Cohen said.

It also looked like Meadows was actively trying to catch Cohen in a lie. He pointed to a congressional disclosure form and said Cohen's live testimony contradicted it.

"Yes. Why didn't you put them on the form? It says it's a criminal offense to not put them on this form for the last two years. Why did you not do that?"

"Because those foreign companies that you're referring to are not government companies."

"It says foreign contracts. Do you want us to read it to you?"

"I read it and it was reviewed by my council. And I am a non-government employee. It was not lobbying and they are not foreign contracts."

"This has nothing to do with lobbying. It says it's a criminal offense to not list all your foreign contracts."

The document Meadows was focused on asks witnesses to disclose "contracts or payments originating with a foreign government." Cohen said he had contracts with foreign entities, but that those are private businesses, not government agencies, which means they didn't need to be disclosed. However, Cohen said he and his attorneys would review that form during the lunch break and determine if they needed to make any changes.