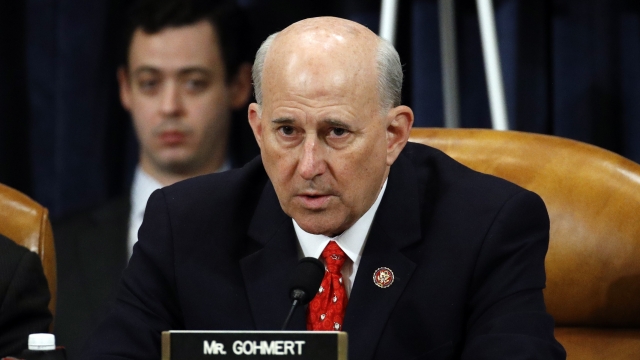 ​The Republican lawmaker says he tested positive for the coronavirus during a screening at the White House on Wednesday.

U.S. Rep. Louie Gohmert has tested positive for the coronavirus.

The Republican lawmaker was set to travel to his home state of Texas with President Donald Trump on Wednesday, but had to cancel the trip after receiving his diagnosis during a pre-flight screening at the White House.

In a video statement later in the day, Gohmert said he was asymptomatic and would be self-isolating. He also offered a theory on how he might have caught the virus.

"I don't know about everybody, but when I have a mask on, I'm moving it to make it comfortable," Gohmert said. "And I can't help but wonder if that, you know, put some germs in the mask — if, keep the hands off your mask. But anyway, who knows?"

On Tuesday, Gohmert attended a House Natural Resources Committee hearing in person, and was also present at a House Judiciary Committee hearing with Attorney General William Barr. Footage shows Gohmert being in close proximity of the attorney general prior to the hearing, with neither of them wearing a mask. A Justice Department spokesperson said Barr would be tested following news of Gohmert's positive results.

Gohmert is at least the 10th member of Congress known to have tested positive for the virus.