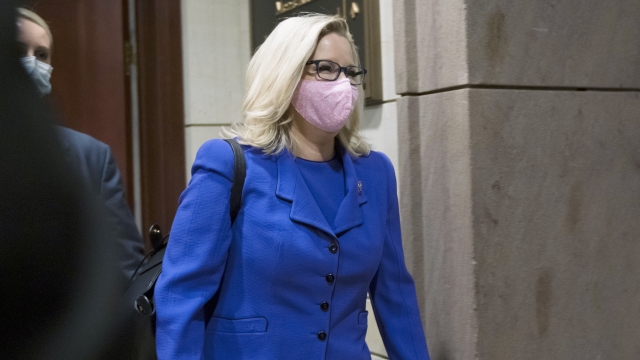 SMS
Rep. Liz Cheney Removed From House GOP Leadership
By Simon Kaufman
By Simon Kaufman
May 12, 2021
The Wyoming representative has faced growing pressure from members of her own political party.
SHOW TRANSCRIPT

House Republicans ousted Rep. Liz Cheney from her post as the chamber’s No. 3 GOP leader on Wednesday, punishing her after she repeatedly rebuked former President Donald Trump for his false claims of election fraud and his role in fomenting the Jan. 6 Capitol attack.

Meeting behind closed doors for less than 20 minutes, GOP lawmakers used a voice vote to remove Cheney, R-Wyo., from the party’s No. 3 House position, a jarring turnabout to what’s been her fast-rising career within the party.

She was Congress’ highest-ranking Republican woman and is a daughter of former Vice President Dick Cheney, and her demotion was the latest evidence that challenging Trump can be career-threatening.

Cheney has refused to stop repudiating Trump and defiantly signaled after the meeting that she intended to use her overthrow to try pointing the party away from the former president.

“I will do everything I can to ensure that the former president never again gets anywhere near the Oval Office,” she told reporters.

Cheney’s replacement was widely expected to be Rep. Elise Stefanik, R-N.Y., who entered the House in 2015 at age 30, then the youngest woman ever elected to Congress. Stefanik owns a more moderate voting record than Cheney but has evolved into a vigorous Trump defender who’s echoed some of his unfounded claims about widespread election cheating.