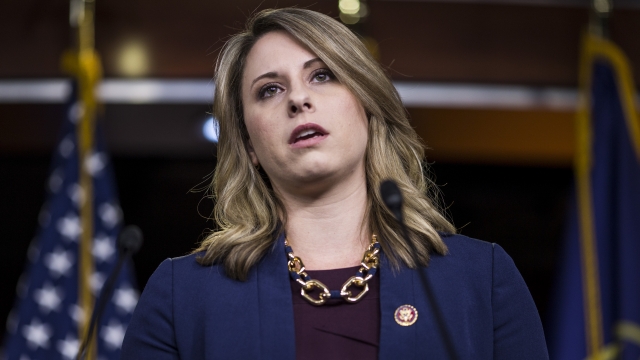 SMS
Rep. Katie Hill Resigns From Congress Amid Affair Accusations
By Katherine Biek
By Katherine Biek
October 28, 2019
The House Ethics Committee was investigating allegations that Hill was having an inappropriate relationship with one of her congressional staffers.
SHOW TRANSCRIPT

Hill's resignation came less than a week after the House Ethics Committee said it would investigate allegations that she was having an inappropriate relationship with one of her congressional staffers.

In a letter to her constituents, Hill denied having an affair with that male staffer. But the California Democrat admitted to having a consensual relationship with one of her female campaign staffers during her 2018 run for Congress.

House rules prohibit lawmakers from having a sexual relationship with someone on their staff. But the House doesn't have any jurisdiction over Hill's relationship from before she joined Congress.

In her resignation statement, Hill blamed her "abusive husband" and "hateful political operatives" for "driving a smear campaign built around cyber exploitation" against her.

Despite having zero political experience, Hill defeated a Republican incumbent in the 2018 midterms. She served as the vice chair on the House Oversight Committee and also held a key leadership role in the Democratic Caucus.

House Speaker Nancy Pelosi said Hill made the right decision to resign, saying in a statement, "We must ensure a climate of integrity and dignity in the Congress, and in all workplaces."