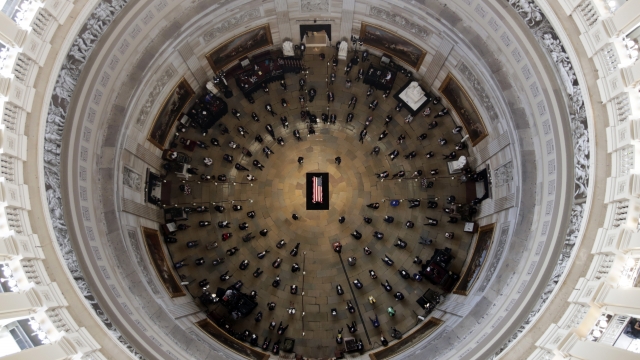 On Monday, members of Congress and Lewis' family gathered to pay respects to the man who was often called "the conscience of the Congress."

In Washington, a somber ceremony in the Capitol rotunda celebrating the life of longtime Rep. John Lewis of Georgia.

A hearse with the late civil rights leader’s body was met by crowds of mourners as it visited sites across Washington, D.C., that were key to Lewis' life.

The procession passed the Lincoln Memorial, where Lewis spoke alongside Martin Luther King Jr. during the 1963 march on Washington; the Smithsonian's National Museum of African American History, which was built after Lewis' yearslong push for congressional funding; and the newly christened Black Lives Matter Plaza near the White House, the site of the 17-term congressman’s final public appearance last month.

“How fitting it is that in the final days of his life, he summoned the strength to acknowledge the young people peacefully protesting and in the same spirit of that march, taking up the unfinished work of racial justice,” said House Speaker Nancy Pelosi at a Capitol Hill memorial service.

The ceremony featured dozens of members of Congress paying their respects, including those from across the aisle.

“Even though the world around him gave him every cause for bitterness, he stubbornly treated everyone with respect and love, all so that, as his friend Dr. King once put it, ‘We could build a community at peace with itself.’”

Lewis will lie in state this week, and members of the public are allowed to pay respects Monday evening and all day Tuesday before the congressman’s body is to be flown back to Georgia.