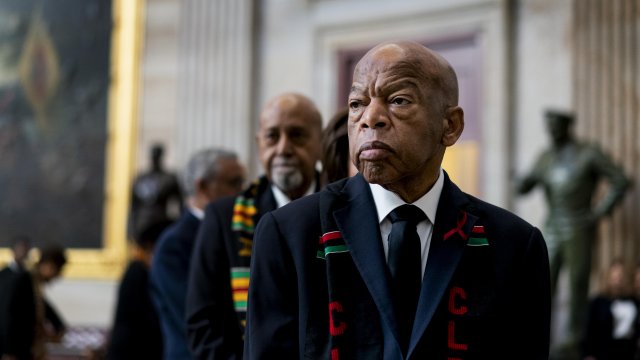 "We are one people. We're one family. We're one house. We all live in the same house."

Lewis was well-known for his efforts to advance the civil rights movement in the 1960s. He was Chairman of the Student Nonviolent Coordinating Committee, was one of the original Freedom Riders and helped lead the historic March on Washington in 1963.

During his time as a civil rights activist, Lewis was arrested more than 40 times and endured physical attacks and serious injuries, including a broken skull suffered during a march in Selma, Alabama that became known as "Bloody Sunday." He was one of the "Big Six" leaders of the movement, which included Dr. Martin Luther King, Jr.

Lewis officially launched his political career in 1981, when he ran for a seat on the Atlanta City Council. He was elected to Congress in 1986, where he served as U.S. Representative of Georgia's Fifth Congressional District for 34 years.

"How can any person of faith, of conscience, vote for a bill that will put a million more kids into poverty?"

Lewis was diagnosed with stage 4 pancreatic cancer in December 2019. But he vowed to continue working as he underwent treatment for the disease.

"We were beaten, tear-gassed, some of us was left bloody right here on this bridge. 17 of us were hospitalized that day."

The daughter of Martin Luther King, Jr., Bernice King, said in a tweet, "You did, indeed, fight the good fight and get into a lot of good trouble."

Former President Barack Obama awarded Lewis the presidential medal of freedom during his presidency. He released a statement after Lewis' death saying: "He loved this country so much that he risked his life and his blood so that it might live up to its promise. And through the decades, he not only gave all of himself to the cause of freedom and justice, but inspired generations that followed to try to live up to his example."

Lewis was preceded in death by his wife, Lillian Miles Lewis. He is survived by their only son, John-Miles Lewis.