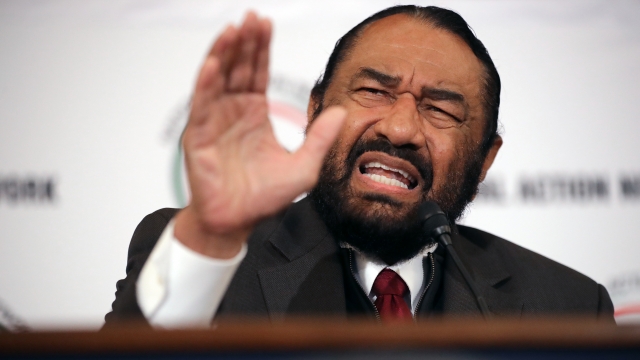 On Monday, Green announced his plans to force a House floor vote on the matter before lawmakers leave for the August recess. This marks the third time the congressman from Texas has forced a vote on impeachment, but the first time he's done so in a Democrat-controlled chamber. Green said he's reviving his push for an impeachment vote over President Trump's recent racist tweets aimed at four Democratic House members, all of whom are women of color.

"The aforementioned Donald John Trump has, by his statements, brought the high office of president of the United States in contempt, ridicule, disgrace and disrepute," Green said. "Therefore, Donald John Trump, by causing such harm to the society of the United States, is unfit to be president and warrants an impeachment trial and removal from office."

More than 80 House members are in favor of launching a formal impeachment inquiry. But even some of those who have said they'd support Green's resolution say the timing isn't ideal. Rep. John Yarmuth said: "I think the timing's awkward with [Robert] Mueller coming next week, and we have a recess coming. That's probably not the best time to do it." Rep. Jared Huffman said he respects Green's right to bring forth the resolution, but also said he doesn't "expect this to actually be the mechanism that starts an impeachment inquiry." And Speaker of the House Nancy Pelosi still opposes opening up an impeachment inquiry, saying the move is too divisive and that President Trump is "just not worth it."

On Tuesday, the House approved a resolution that formally condemns President Trump's comments as racist.