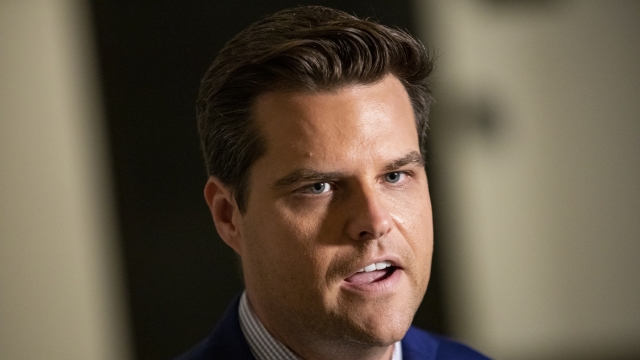 In a letter sent to the House Ethics Committee on Wednesday, Gaetz asked the panel to investigate Schiff for violating multiple House ethics rules.

"When Adam Schiff engaged in a theatrical retelling of President Trump's conversation with President Zelenskyy — to deceive and disorient the American people — he acted in a way that was not consistent with House rules and was not consistent with House ethics," Gaetz said. "If you are going to expel a member of Congress from a hearing who does not intend to participate by asking questions, that you are required to hold a vote on that measure. Adam Schiff held no such vote when he expelled me multiple times from simply being able to observe what the heck was going on."

Schiff gave a summary of President Donald Trump's phone call with Ukrainian President Volodymyr Zelenskyy during an Intelligence Committee hearing last month. Although he said the summary "was meant to be at least part in parody," multiple Republican lawmakers, as well as President Trump, accused him of lying to Congress and called for his resignation.

Last week, Gaetz, along with around two dozen House Republicans, stormed a closed-door hearing related to the impeachment inquiry and demanded they be allowed to watch the proceedings. But House rules dictate that if you're not a member of one of the committees holding a closed-door deposition, you can't attend.

Speaker of the House Nancy Pelosi says the House will hold a vote on Thursday to formalize the next steps of the impeachment inquiry. Gaetz said if the resolution passes, it would grant Schiff "unprecedented power" in regard to the impeachment proceedings.

Gaetz urged the Ethics Committee "to make all appropriate referrals to the Department of Justice for further investigation and prosecution" after it's finished its investigation.