Rep. Nunes Could Face Investigation Over Alleged Meetings In Ukraine 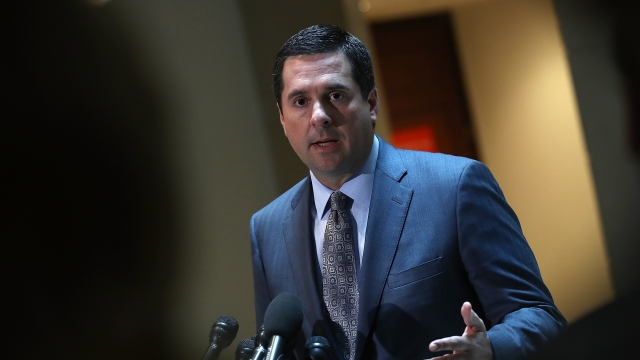 SMS
Rep. Nunes Could Face Investigation Over Alleged Meetings In Ukraine
By Gage Jackson
By Gage Jackson
November 26, 2019
Nunes is accused of taking a meeting in Ukraine that "appears to be related to obtaining materials solely for the purposes of domestic politics."
SHOW TRANSCRIPT

The Democratic Coalition filed an ethics complaint against Rep. Devin Nunes that could possibly place him under review for violating House rules.

The complaint alleges he violated House rules by meeting with a former Ukrainian official in attempt to investigate the Bidens on a taxpayer-funded trip.

The complaint was filed with the Office of Congressional Ethics, which reviews cases against lawmakers and refers them to the House Ethics Committee.

A Congressional expense report shows that Nunes and three aides did visit Europe from Nov. 30 to Dec. 3 of last year for House Intelligence Committee business. But the record doesn't show exactly where in Europe they went. The trip cost over $63,000.

CNN and The Daily Beast have both reportedly spoken to a lawyer representing Lev Parnas, an associate of Rudy Giuliani who was recently indicted on campaign finance charges. Parnas' lawyer reportedly said his client is willing to tell Congress about a meeting Nunes had in Vienna last year that was meant to dig up dirt on Joe Biden.

Nunes has called the reports "fake news" and threatened legal action against CNN and The Daily Beast.