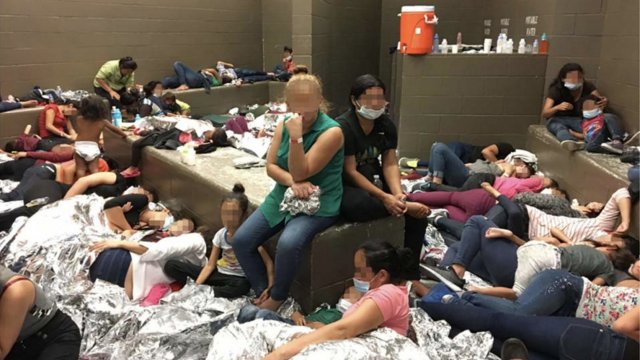 Members of Congress are starting their holiday week away from Washington, traveling the country, and demanding access to some of the nation's immigration facilities.

"What's going through my mind is how inhumanely the common bond of our common humanity seems absolutely missing," she said.

Dean was able to interact with both the women and children at their respective facilities, despite guards' orders not to. The news media are not allowed in, but Representative Joaquin Castro appeared to sneak in a recording device to record this video, showing a group of women huddled in a room complaining about a lack of medical treatment and saying they’ve been forcibly separated from their children. Dean says some had cracked lips and had only been allowed showers every 9 to 15 days.

"Inside the crowded cell there was a stainless steel prison toilet with no seat, water in the toilet. The toilet did flush, no water in the sink above it. And the women were told to drink out of the toilet for water. That was clean enough. The guards deny that," Dean explained.

Customs and Border Patrol says the claim of women drinking from toilets is “completely untrue.” Officials say the toilets have a separate compartment for potable water.

The members were met with protesters outside as news broke that a Facebook group of nearly 9,500 current or former members of border patrol are posting derogatory comments about migrants and Latina members of Congress.

"As horrific as this scar is, I'm confident this is not the values of our country. As we were heckled and hollered at. These were Americans heckling us. They reflect a small cancerous portion of some of thinking of us in this country. But the vast majority aren't like this. We will be judged by how we treat the least of these," Dean said.

CBP did not return our request for comment. Dean says she is committed to fixing what she saw.

"I put a little note up the guards chided us for trying to communicate through a closed door. I scribbled we love you. The guard said what are you doing and I showed him the note. And he sort of backed off. The children had written back how can we help you? It reminded me that the children have more humanity than the people that were watching them," she said.