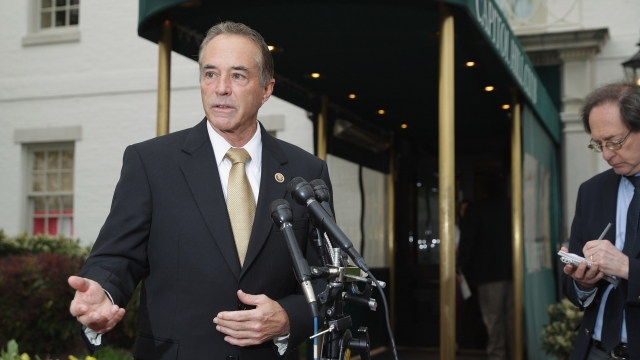 Collins is accused of sharing nonpublic information with his son in order to avoid a financial loss.

On Tuesday, Collins is expected to change his plea in an ongoing insider trading case to guilty. His son and another family member are scheduled to change their pleas on Thursday, according to court filings.

Collins has represented New York's 27th District since 2013 and was the first sitting congressman to back Donald Trump's presidential campaign.

He is accused of giving his son nonpublic information about Innate Immunotherapeutics that he learned as a member of its board of directors. Collins was the biotech company's largest shareholder, and he was allegedly trying to avoid a significant financial loss after a failed drug trial for a multiple sclerosis treatment.

He was indicted in August 2018. At the time he said the charges against him were "meritless" and that he "followed all rules and all ethical guidelines when it comes to my personal investments, including those with Innate." He pleaded not guilty to both the initial indictment and to a revised version.

According to prosecutors, Collins received an email from the Innate Immunotherapeutics' chief executive telling the board that a drug trial had failed. Collins responded: "Wow. Makes no sense. How are these results even possible???"

A federal indictment citing text messages, phone records and bank records says within a few minutes of receiving the email, Collins and his son, who owned millions of Innate Immunotherapeutics shares, called each other six times. Collins allegedly told his son about the failed trial. Prosecutors say the family was able to dodge a "significant" financial loss thanks to that insider knowledge. After the news became public, the company's stock dropped more than 90%.

A House member who is convicted of or pleads guilty to a serious crime isn't legally bound to give up their office. But those convicted and sentenced to two or more years in prison have to "refrain from voting" in committee or on the floor. Most House members who have pleaded guilty to serious crimes have resigned, and those who didn't were expelled by the House.

Collins was reelected several months after he was indicted in the insider trading case. His resignation will be effective after it's officially filed during the House's scheduled session on Tuesday.