Dem. Rep Aguilar Says Border Talks Should Be Based On 'Evidence' 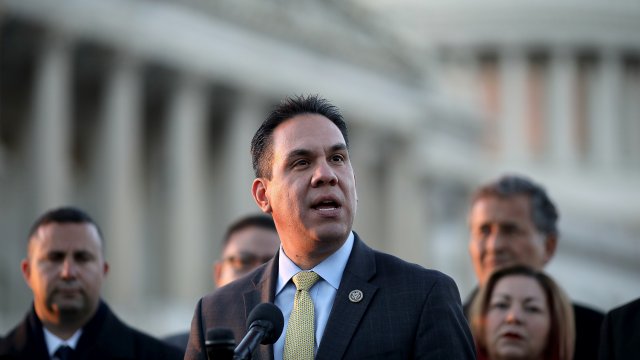 SMS
Dem. Rep Aguilar Says Border Talks Should Be Based On 'Evidence'
By Alexandra Miller
By Alexandra Miller
January 30, 2019
A bipartisan, bicameral group from Congress is set to negotiate a plan to avert a second government shutdown.
SHOW TRANSCRIPT

Democratic Congressman Pete Aguilar can't predict the future. But if he could, he hopes February 16th looks a little like this.

"Hopefully the government will be open," he said.

The countdown has started; less than three weeks until the government could shut down. Aguilar is part of a 17 member group of Democrats, Republicans, House members and senators, looking to make sure that doesn't happen.

"We need to put blinders on, focus on what we can working with our colleagues on both sides in order to find a solutions," Aguilar added.

It's going to be a tough road to navigate. The president wants $5.7 billion for a wall at the southern border. It was a campaign promise of his and one he shut down the government for 35 days over. Democrats like Aguilar have been pushing for border security in other ways, through technology like drones. The California congressman knows it's unlikely they'll make progress without funding for some sort of physical barrier.

He wants to hear the administration's need for a wall dollar for dollar. Mile by mile. Then, he wants to compare the request with outside experts. Should those outside experts deem a wall necessary in specific regions he says Democrats could get on board.

"If the evidence said that a physical barrier that exists today might need a secondary barrier now or we need to replace barriers that's a conversation we're happy to have but it has to be based on facts," Aguilar explained.

In the end, Aguilar says this conference committee shouldn't be focused on getting the president's signature.

"We can't be concerned about what the president feels about the deal. Our job is to make sure we can get Democrat and Republican members to sign this report. "