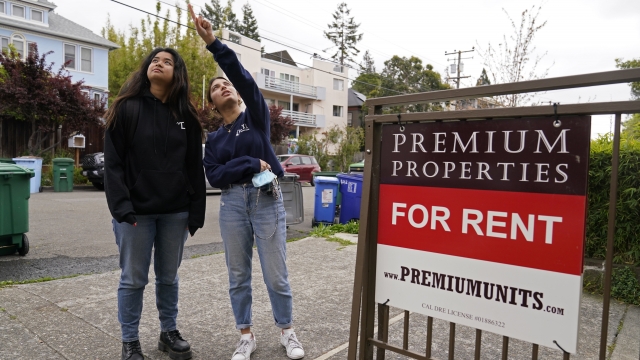 SMS
No Relief From Skyrocketing Rent Prices Nationwide
By Kellan Howell
By Kellan Howell
August 18, 2022
Many Americans are frustrated with inflation and having to shell out hundreds of extra dollars for rent as it increases across the country.

Rent prices continue to hit historic highs as inflation takes its toll on the economy.

"At night, I just lay there and pray that this is eventually going to start slowing down with this inflation," said Anthony Erringer, a Tucson, Arizona, resident.

It's a nationwide nightmare.

"Three times the amount of rent these days. People aren't even making the amount of the rent," said Shaneika Cooper, a Las Vegas resident.

Some tenants are now shelling out hundreds more a month.

"I was completely astonished to see my rent going up from $2,895 to $3,500," said Rosieangela Escamilla, a San Diego resident. From San Diego to Newport, Kentucky, rent is increasing.

"It just feels like you have nowhere to go and nowhere to turn to," said Catherine Chandler, a Newport resident.

According to a new survey from Freddie Mac, nearly 60% of renters said they were hit with rent increases this past year.

Those increases hit upwards of 10%. And a majority reported that their wages did not increase at a suitable rate.

Soaring rent with historically high housing costs is a one-two punch for anyone looking for an affordable place to live, putting more Americans at risk for homelessness.

"For a person like myself, or someone who makes less than $30,000 a year, affordable is out of reach," said Lewis Bass, a Detroit resident.

The key factors are landlords passing on their rising costs to their tenants. On top of that, some are capitalizing on the strong demand for housing, especially in new market hot spots where people migrated during the pandemic for remote work.

That demand hikes prices for everyone and changes the types of housing on offer.

Michael Hicks is a professor of economics at Ball State University in Indiana.

"The pressure for them to go up is now lower. So the landlord can no longer sell their property as easy, and they aren't facing any growth in cost," said Hicks.

A decrease in rent prices is likely a ways off. But experts say they will become more affordable by stabilizing. In the meantime, renters are doing what they can to stay afloat and keep their home sweet home.

"People like me that have been here for years and not necessarily want to buy, but have been part of the community, it's like we're feeling pushed out," said Crystal Jones, a Carmel, Indiana, resident.