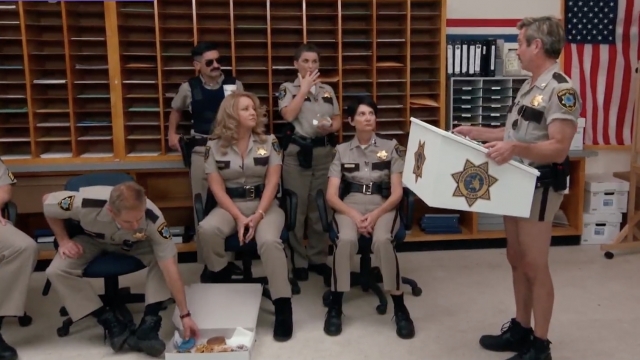 "Reno 911!" is back — and just in time to parody the latest headlines and conversations about law enforcement.

"There was so much in the headlines that happened between season seven and eight, really, that we knew we couldn't avoid," said Robert Ben Garant, co-creator of "Reno 911!" "So, we just sort of went through them like a checklist and said, 'Okay, what's the Reno version of this?'"

The slapstick police parody originally ran on Comedy Central from 2003 to 2009 and returned to streaming in 2020.

"The Miami Beach or Miami Police Department gave us a gift, which is they assembled a quick riot response bicycle division, and they went viral, and of course, people were tagging it with 'Reno 911,'" Thomas Lennon, co-creator of "Reno 911!" said. "So, we basically duplicated. We got 11 or so stunt people, and we spent a full day doing Miami Police Department-level bad crashes in a parking lot. Just lame stunts. Everybody got hurt. It was amazing."

The unscripted comedy also returns amid growing criticisms about the way police are glorified or celebrated in pop culture.

The reality show "COPS" — which "Reno 911!" is a direct parody of — was canceled in 2020 but then revived by Fox Nation in 2021. The workplace sitcom "Brooklyn Nine-Nine" ended that same year.

But while "Reno 911!" never ignored the headlines, the creators say they just wanted to tell light-hearted, silly and absurd jokes.

"I think you can tell we have no agenda," Lennon said.

"I don't think we're smart enough to have an agenda," said Kerri Kenney-Silver, co-creator of "Reno 911!"

The new season of "Reno 911!" premieres Friday on Roku.