The Victims Of The Capital Gazette Shooting 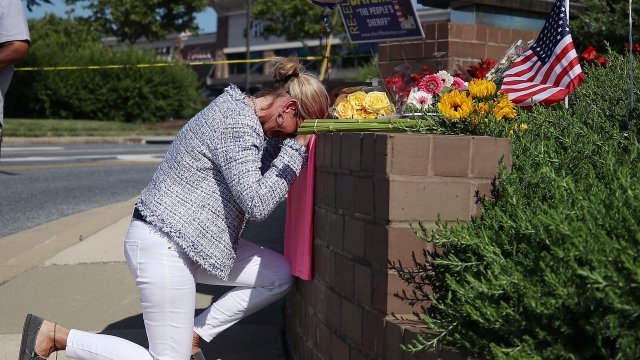 SMS
The Victims Of The Capital Gazette Shooting
By Cat Sandoval
By Cat Sandoval
June 29, 2018
A mass shooting at a newsroom in Annapolis, Maryland, killed five people.
SHOW TRANSCRIPT

Rob Hiassen, 59, worked as an assistant editor and columnist for the newspaper. He described his perfect job as "simply showing up promptly to work and bringing in cookies from time to time," saying, "Alas, there's no market for those outstanding qualities." Quite the funny man, he was also described by his colleagues as a generous mentor. He was called "Big Rob" because he was so tall. He celebrated his 33rd wedding anniversary about a week before his death.

Wendi Winters, 65, was a community correspondent who led the special publications for the paper. Winters was a former New Yorker who moved to Maryland 20 years ago. She described herself as a "proud Navy mom" who made a "mean s'more."

Gerald Fischman, 61, worked as the editorial page editor. He had worked for the paper since 1992, and when he first applied, he was turned down. According to the Capital Gazette, he wrote a Christmas editorial every year, even though he was Jewish.

John McNamara, 56, was the staff writer who had covered high school, college and professional sports for decades. He went by the name of "Mac." Colleagues say it was his dream job to cover sports. He published two books about sports at his alma mater, University of Maryland.

Rebecca Smith, 34, worked as a sales assistant. She was a recent hire. She described herself on Facebook as an "endo warrior"— a survivor of endometriosis — a "dog mom," and a "bonus mom to the best kid ever."