Remembering The Victims Of The Boulder, Colorado Shooting 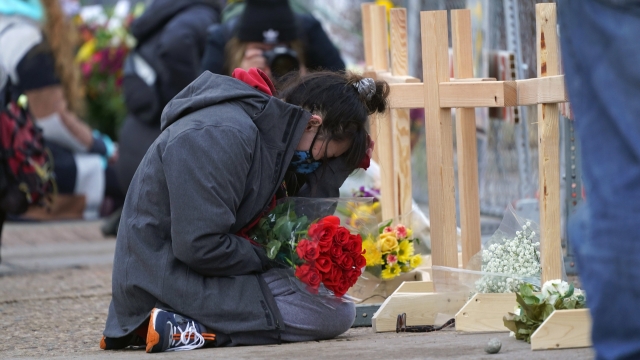 SMS
Remembering The Victims Of The Boulder, Colorado Shooting
By Newsy Staff
By Newsy Staff
March 24, 2021
Memorials are set up honoring the 10 victims.
SHOW TRANSCRIPT

We know when tragedies like this happen there can be too much focus placed on the suspects.

Here's our promise: We'll tell you what we know about the suspect but we're not going to say his name or endlessly show his picture.

Instead we want you to remember the names and see the pictures of the victims.

We told you Wednesday about officer Eric Talley. He was the first to respond to the scene and had seven kids.

Kevin Mahoney was 61 years old. His daughter shared this photo of him walking her down the aisle last summer. She says her father represented all things love.

Rikki Olds was a manager at the King Soopers. Her aunt said she was a shining light, the type of person who would cheer you up when you were down.

Jody Waters was 65, the oldest victim. She was the mother of two and a grandmother who loved horses and hiking.

Suzanne Fountain was a financial counselor who had a passion for music and theater. A friend described what it was like to know her.

“She would just light up the room. And she was a bright light, you know, she was one of those people that i think a lot of people who met her felt they had already known her," said Helen Forster.

Denny Stong was 20 years old. He worked at the store but was shopping for himself at the time of the shooting. A friend said he was "a kind soul with a funny sense of humor."

Tralona Bartkowiak co-owned a clothing store with her sister in Boulder. She was passionate about the local arts and music scene and loved to travel.

There was also Neven Stanisic. He was 23. He was born in the U.S. after his family fled from the former Yugoslavia.

Lynn Murray was the mother of two and used to work as a photo director for Cosmopolitan. Her family moved to Colorado from New York almost 20 years ago.

Teri Leiker worked at the store and had been with the company for more than 30 years. She was a big fan of the University of Colorado Buffaloes. A friend called her a selfless person.

Ten victims all taken too soon. Memorials are set up honoring those lives.

Colorado officials said we cannot be numb to tragedies like this one.

The flags at the White House are flown at half staff to honor the victims. Those flags had just gone back up after they were lowered following last week's shootings in Atlanta.