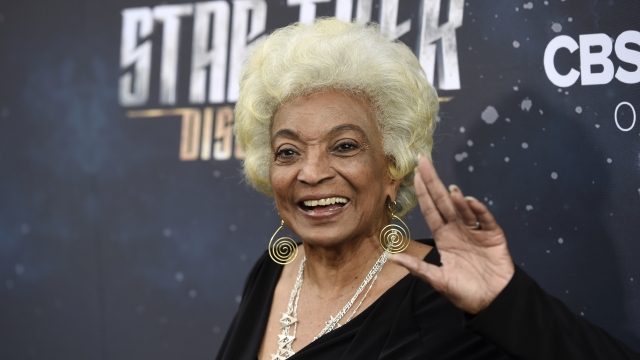 It was her groundbreaking role in "Star Trek" that made her famous, but after its first season, Nichelle Nichols almost left Lt. Uhura behind.

Nichols told series creator Gene Roddenberry she was quitting to pursue a stage career — that is until a chance encounter with a special fan, civil rights leader Dr. Martin Luther King Jr.

"He said, 'You can't, don't you know who you are? To our movement, to everyone, you are there in the 23rd century. You've created a role that has such dignity and is so powerful you can not leave,'" Nichols once said. "So I went back Monday morning and told Gene, and he said, 'God bless Dr. Martin Luther King. Somebody sees what I'm trying to achieve.'"

In 1968, Nichols and William Shatner, playing Captain Kirk, shared the first interracial on-screen kiss on national television, during the height of the turbulent civil rights movement.

"It changed television forever, and it also changed the way people looked at one another," Nichols said.

Nichols would go on to play Lt. Uhura in six "Star Trek" movies, connecting with countless "Trekkies" at fan conventions.

"This is just simply millions of people from every walk of life and every age who subscribe to adage of peace in our galaxy," Nichols said. "It's as simple as that. It gives hope."

"I had the privilege of recruiting the first women and minority astronauts for the space shuttle program," Nichols said.

After her death on July 30, tributes to her poured in online. Shatner wrote, "She was a beautiful woman and played an admirable character that did so much for redefining social issues in the U.S. and throughout the world." Actor Celia Rose Gooding, who plays Uhura on the new Trek series "Strange New Worlds” wrote, "She made room for so many of us... Forget shaking the table... She built it!"