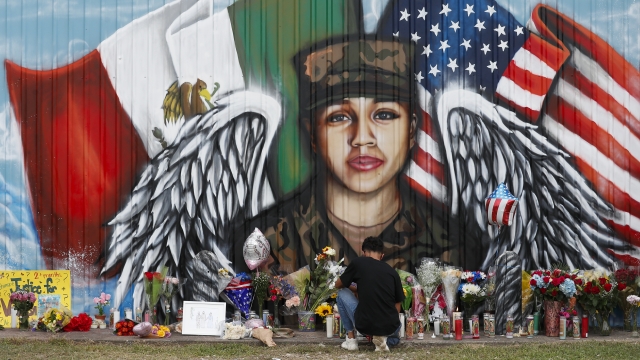 SMS
Remains Of Missing Soldier Vanessa Guillen Positively Identified
By Caitlin Baldwin
By Caitlin Baldwin
July 6, 2020
Guillen went missing from Fort Hood in April sometime after she told family she was being sexually harassed by a superior.
SHOW TRANSCRIPT

The remains of 20-year-old soldier Vanessa Guillen have been positively identified, according to her family's attorney.

Guillen went missing from Fort Hood in April sometime after she told family she was being sexually harassed by a superior. Her remains were found in a shallow grave last week 20 miles from the Texas base.

An attorney for Guillen's family says investigators believe she was beaten to death before being dragged there. The attorney said it took awhile to confirm the remains were Guillen because her face was so badly beaten.

"They couldn’t identify with the dental examination ... Vanessa’s face was bashed in so badly, there was no teeth for them to identify. So that's why they had to send her body to Dover Air Force base to get examined in that fashion and get confirmed that it was her, that's why it took longer than they expected,” attorney Natalie Khawam said.

The main suspect in her disappearance, Spc. Aaron David Robinson, killed himself on Wednesday. Fort Hood is investigating Guillen's death, but her family is calling for a congressional probe.