Reliving The Parkland Shooting With The People Who Were There 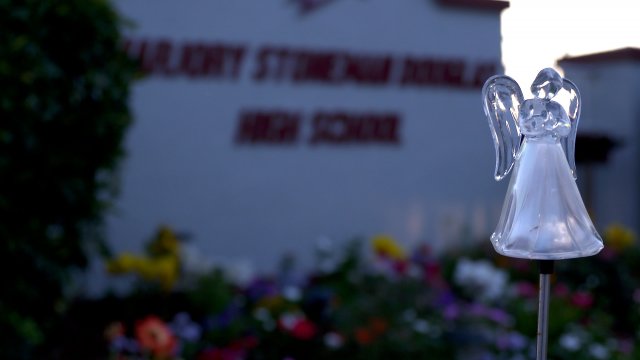 SMS
Reliving The Parkland Shooting With The People Who Were There
By Jamal Andress
By Jamal Andress
February 14, 2019
Last year, a former student carried out the worst high school shooting in U.S. history. Here's how those affected remember that day.
SHOW TRANSCRIPT

On Feb. 14, 2018, a 19-year-old former student from Parkland, Florida, entered Marjory Stoneman Douglas High School and carried out the worst high school shooting in U.S. history. It lasted six minutes. Here's how some of the students and parents most profoundly affected by the tragedy remember that day.

ANNIKA: "We were shopping in Walmart, which is next door to the school. … We walk out to the parking lot and I see some kids that look like high school age. And I'm thinking to myself, I wonder why these kids are in the parking lot, because school didn't come out yet. And then as we walk closer to the school, we start seeing helicopters and we hear sirens, and and then we start seeing kids running and screaming."

MADDY: "So it was like, the end of the day. I was kind of tired. I was ready to go home. I wasn't, like, really paying attention. And then all of a sudden, I heard like, two or three loud bangs in the hall. And then I kind of just, like, froze, because we didn't really understand what was going on."

MADDY: "Then I felt it. I felt this like big snap on the side of my side. It didn't feel like anything sharp. It felt like just a ton of bricks hit me. And then I realized, like, I was shot."

ANNIKA: "We asked people around, 'What's going on?' And somebody said, 'Oh, there's a rumor there might have been a shooter. I think somebody was shot, but they killed the shooter.' And then maybe 10 minutes later, Alex calls us and says, 'I've been hit in the back of the head. I'm in an ambulance.'"

ISA: "It was painstakingly long. It felt like a really long time. … I knew we were going to get out of there. But I was just kind of like, I don't know when it's going to happen. It felt like it could be the next day because that's how slow time was going."

ISA: "I didn't feel anything until I saw it, which I feel like is always like the case. If you're like ... injured or something, you don't feel it until you see it. Then you start feeling pain."

MADDY: "I was like, panicked and just feeling like, I got shot. What am I gonna do? I remember like, slowly, fading and then I blacked out."

Maddy Wilford, Isabel Chequer and Alex Dworet were all injured in the shooting and transported to the hospital. Alex and Isabel's wounds weren't life-threatening, but Maddy was listed in critical condition. Alex's older brother, Nick, was still missing.

ANNIKA: Well, I think initially when Alex called me and said he was injured, I think immediately you got that like, 'OK, I have an injured child, I need to deal with that.' So you thought Nick must be OK. That's what I thought. So I think that I was not focused on or worried so much about Nick at the time because, 'Oh, my big strong boy, he's fine. I have to go worry about Alex.'

MADDY: I was in and out of consciousness when I was, like, in the ambulance or in the hospital. But I finally woke up Thursday night. So after like a day and a half, I finally woke up fully. … It was also like a lot of fear, like waking up not being able to talk and then realizing that, like, the shooting actually happened."

ISA: "Just like, seeing my parents eventually. And then also just seeing all my friends, whether it was that day or the next day, it just felt so good. Like, I never wanted to hug everyone more in my entire life."

MITCH: "I texted Nick a couple of times. And for some reason I texted him, 'I love you.' Because I was getting worried. I was feeling very worried, you know, feeling like this dark cloud."

ISA: "A lot of times I feel guilty that, like, I was able to be released so quickly and sleep in my own bed that night while they had to stay in the hospital and go through surgery, all these kinds of things. I'm definitely most grateful. I'm very, very grateful. But with that, there comes a lot of guilt for sure."

MADDY: "I feel like making voices from inside the building heard definitely helps people understand what actually happened. And it's also kind of healing for me to tell my story more and more, because the more I tell it, the more I like, get over it emotionally. So it kind of helps me, and then I feel like it also helps other people."

After Alex was released from the hospital, Mitch and Annika Dworet waited at a nearby hotel, where officials were supposed to relay information about missing students.

MITCH: "A lot of people started walking by us and looking at us, and you just could tell."

Nick was killed during the attack. He was a senior set to attend the University of Indianapolis on a swim scholarship.

ANNIKA: "You feel so twisted inside because the worst thing in the world happened to us, we lost our son. And at the same time, you're supposed to be the most grateful person in the world because our son survived."

MITCH: "The resiliency that Alex has shown to find certain normalcy as a soon-to-be-16-year-old — he enjoys fashion and music, and he has a girlfriend and friends. It's just a testament to this inner spirit that he has. It just impresses me that he's able to do that, for all that he's been through."