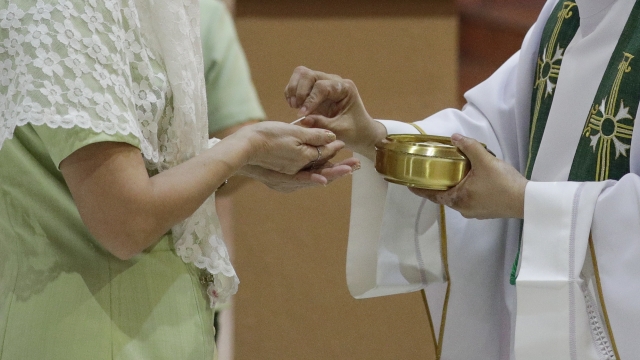 Many places of worship reconsidering traditional practices, such as providing wine from communal cups or sharing prayer mats.

In the nation's capital, coronavirus concerns are not just around policy. Over the weekend, the city's first case was confirmed in a church official.

And as the coronavirus continues to spread across the U.S., places of worship are taking precautions to protect their members.

Worshippers at Christ Church Georgetown in Washington, D.C., where at least one case has been confirmed, are on high alert. All services and meetings have been canceled until further notice. Some members of the congregation have also been asked to self-quarantine.

"This is a fluid situation. We continue to ask residents to stay home if they're sick," D.C. Mayor Muriel Bowser said.

Some churches across the country have adopted new rules to stop the spread of germs among their congregations.

"We are no longer exchanging what we call the kiss of peace, so there's no shaking hands, hugging. ... We're asking people not to connect with one another," Knipper said.

Near Princeton University in New Jersey, Deacon Jim Knipper says that like many other U.S. Catholic churches, his church has removed its holy water fonts, stopped providing wine from a communal cup and asked churchgoers to avoid physical contact when possible.

Synagogues in New York, D.C. and other areas canceled celebrations in honor of the Jewish holiday Purim. Rabbis are also asking people not to kiss the Torah and to avoid physical contact with other congregants. Some are even opting to have virtual bar and bat mitzvahs.

And Muslim leaders are advising worshippers to bring their own prayer mats to mosque, avoid shaking hands and stay home if they feel under the weather.

Physical contact is often central to religious services. But Knipper says parishioners don't seem to mind breaking with tradition to keep each other healthy.

"The people have been very, very good about it. They understand it. There's been no complaints, there's been 100% adherence at all the masses I went to. People are like, OK, this is the world that we're in, this is what we have to do for now, these are temporary," Knipper said.