Relatively Little Has Changed Since Floyd's Death, Despite Momentum 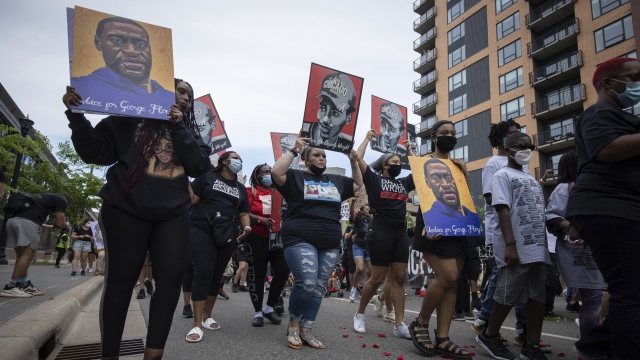 SMS
Relatively Little Has Changed Since Floyd's Death, Despite Momentum
By James Packard
By James Packard
May 25, 2021
Many police departments banned chokeholds or made other reforms after George Floyd died. But broader problems persist, and change is slow.

On a warm afternoon in Minneapolis, hundreds gathered at the feet of the courthouse where Derek Chauvin was convicted just weeks ago of murdering George Floyd. A year after his death, they cried out for deeper change.

"Convicting Chauvin is not enough," the Rev. Al Sharpton bellowed to the crowd, getting a rousing response.

Carmen Means, a local activist and pastor, reminded the crowd of the generations before them who fought for basic rights for Black Americans.

The palpable optimism sparked by Chauvin's conviction, diluted with a sense of all the work left to do.

"We need to make sure that everybody is doing something and you don't wait until something happens," said Sybrina Fulton, whose son Trayvon Martin died at the hands of a community watchman in 2012.

The man who shot him was acquitted in a 2013 trial. But eight years later, she watched a jury convict George Floyd's killer of murder.

"I was feeling brokenhearted," she told Newsy. "I looked at all the other lives that have been lost just for us to get to that point. So while I was happy, I was also sad."

In the months after George Floyd's death, dozens of large police departments expanded body camera use, and a majority of the nation's largest departments now ban chokeholds. Campaign Zero, a police reform advocacy group, says that’s a new development. It counts 46% that implemented chokehold bans since June 2020, by far the biggest shift of the changes they measure.

"Minneapolis will never be the same," she said. But she also knows change needs to be about a lot more than policing.

"As the Chauvin trial was going on, and even before it started, many in our Black community said, 'He's not going to get convicted, not going to happen,'" she recalls. "That's the way many in our community view the system. It has never worked for them. So we have a lot of progress to make on legitimizing the entire system."

Moriarty sees an opportunity to beef up investigations and followup after police-involved deaths. She wants to ensure prosecutors charge officers whenever it's appropriate.

"I think prosecutors need to be part of accountability here, but they have to choose to do that," she said.

"A lot of eyes were opened about what happened to George Floyd in the aftermath," Moriarty said. "A lot of people thinking, 'OK, things aren't what I thought they were,' and people who are open to looking at solutions, even though we may disagree."

Floyd’s death also sparked a broader Justice Department investigation, reopened last month, into whether the Minneapolis Police Department has a pattern of unlawful policing. But for all the change, state-level reforms for police accountability remain in limbo, and federal momentum for sweeping police reform is slow to materialize.

"Too many people doing too much talking, you know, and not enough action," Fulton said. "It needs to be more action."

2021 is tracking with past years for deaths at the hands of police and the deaths of other black men, like Daunte Wright, are opening fresh wounds.

"Sometimes I can feel my body going into a mode of sadness, and I back away," Fulton said.

She acknowledged she's still optimistic more meaningful change is coming. She, like many, is looking to a better future, even if her son won't see it.

"I put all my eggs in a basket with the young people," she said. "I really have faith that they're going to make a change for the better."