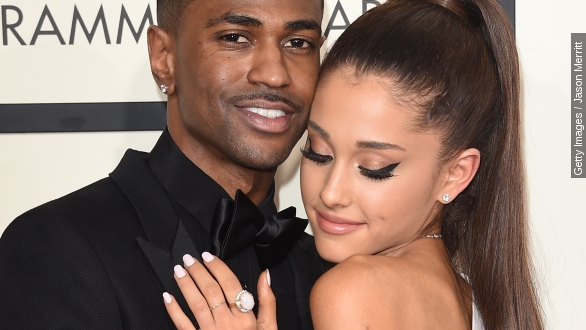 Hollywood love: it often blossoms in front of the camera then turns into a slow-burning train wreck that we just can't seem to look away from. And this week is no exception.

We've seen a couple break ups and one possible engagement confirmation. Lets rip off the band-aid and start with the bad news first.

It looks like Ariana Grande and Big Sean have called it quits after just eight months of dating.

"What I like in women is when they have drive, they have focus," Big Sean said on "The Real."

And the rumor is that's why they broke up. Both Big Sean and Grande are just too busy, especially with her current tour.

Although there is some speculation floating around that Justin Bieber could have had something to do with it. Earlier this month, the Biebs was performing alongside Grande when he got a little handsy.

Not long after it looked like Big Sean was pretty heated, tweeting a message that Bieber better keep hands to himself. He later claimed the tweet was a fake.

Back to the break up, which has been confirmed through a joint statement from their reps who said the two are still friends and "kindly ask that the media respect their wish for privacy regarding this personal matter at this time.”

Alright, moving on. We've known this next couple decided to "consciously uncouple" for quite a while, but now it's official.

Monday, it was reported that Gwyneth Paltrow and Chris Martin finalized their divorce after a year of separation.

According to TMZ, there were still some details about property and custody of their two children that needed to be hammered out.

The exes have had an exceptionally friendly divorce, spending time with the kids together and whatnot.

But now that the paperwork is out of the way maybe we'll see them both take their new relationships to the next level.

Paltrow, on the other hand, is rumored to be seeing Glee co-creator Brad Falchuk.

Now, lets end on a happier note, shall we? There's been a lot of buzz surrounding Nicki Minaj and Meek Mill.

Last week, Minaj posted a picture sporting of a huge rock on Instagram with a bunch of emojis.

We haven't seen an official confirmation on whether its an engagement ring, but while on stage with Drake at Coachella this past weekend there was a glimmer of hope.

The Canadian rapper gave Minaj a big hug and told her congrats.

We don't want to jump to conclusions, but if they are engaged it looks like Drake will never get a shot with Nicki after all.