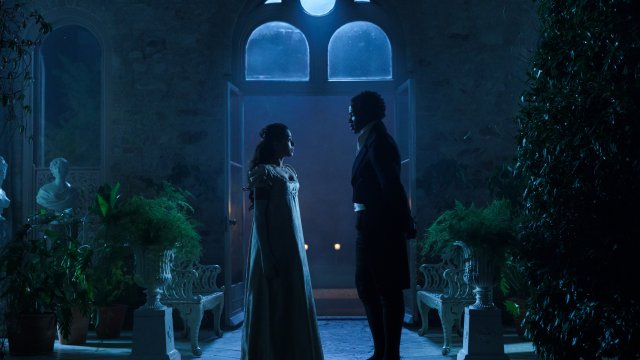 SMS
Regency-Era Romance Movies Are A Booming Brand
By Casey Mendoza
By Casey Mendoza
July 5, 2022
Movies like "Mr. Malcolm's List," taking place in the Regency era of the early 1800s, have all the visual hallmarks of the time with rom-com tropes.

Sometimes, through fiction, you want to escape into different worlds or different times.

"Mr. Malcolm's List" — starring Freida Pinto, Zawe Ashton and Sope Dirisu — is one of the newest films to take place in the Regency era of the early 1800s. It's adapted from the book of the same name by author and screenwriter Suzanne Allain.

"I'm a super fan as well of period pieces," Allain said. "It started with Jane Austen."

"Getting to dive into that world and research and learn and sort of escape into this little visual bubble we were creating was a complete joy and magical, really," said Emma Holly Jones, director of "Mr. Malcolm's List."

"Maybe because the modern world is increasingly dark, and Jane Austen has so much humor that's injected into her writing... the Regency just seemed like a good fit for me," Allain added.

The story follows a scheme to romance a wealthy, but pretentious, nobleman played by Dirisu, and it features all the visual hallmarks of the era, as well as the tropes of modern romantic comedies: meet cutes, makeover montages and miscommunications.

Jones, who made her directorial debut with the film, says that's what drew her to the project.

"One of the things I was always hell bent on finding was something that had that rom-com feeling," Jones said. "I mean the 90s rom-com, the Richard Curtis rom-com, the Nora Ephron rom-com. And when I found 'Mr. Malcolm's List,' I felt very much that it had those bones and that tone to make a modern-day rom-com. It just happened to be in the Regency world."

The release of "Mr. Malcolm's List" follows a slew of modern takes on the Regency era, like the 2020 film adaptation of Jane Austen's "Emma," the upcoming adaptation of "Persuasion" starring Dakota Johnson and Shonda Rhimes' "Bridgerton" series. The second season garnered more than 625 million hours of views in the first month it came out.

Each of these projects inject modern humor into historical settings to make the stories and characters more relatable for today's audiences.

Beyond the Regency era, the same modern twists have been added to Apple's "Dickinson," based on the early life of poet Emily Dickinson. The latest movie spinoff of the World War One era series "Downton Abbey" made more than $192 million worldwide.

Allain says there's a stronger demand for period dramas and comedies now, as well as more of a focus on new writers and diverse casting.

"It's great that Hollywood is finally recognizing that there's a market and an audience for this type of film," Allain said. "Now it seems like things are changing so I think that's wonderful."

"Mr. Malcolm's List" debuted during the Fourth of July weekend, making more than $1 million at the box office.