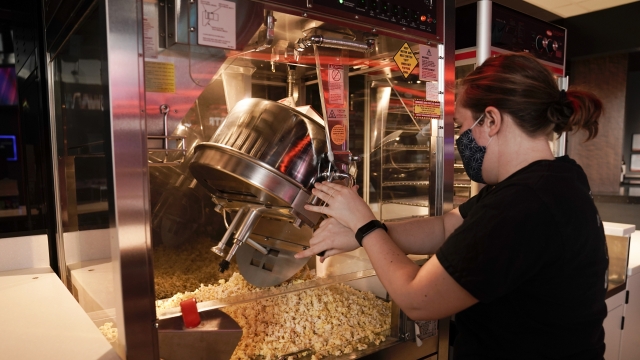 The second-largest movie theater chain in the country did not indicate when it might reopen its doors for a second time.

Lauren Magarino: "Regal Cinemas reopened its theaters in the U.S. less than two months ago. But now the country's second-largest movie theater chain is closing its doors again over the pandemic. Here to discuss is Newsy's Katherine Biek. Katherine, how many employees will be impacted by these closures?"

Katherine Biek: "Regal has 40,000 employees working at its 536 locations here in the U.S. So starting Thursday, excuse me, when those theaters start shutting down, all employees will once again be furloughed. Now, some of them had already been working much shorter shifts because of the pandemic. For instance, one employee in Maine told The New York Times that they've gone from working 25 hours a week to just nine since they were called back to work in August. Regal so far has not given any indication on when it thinks it might be able to reopen for a second time. It announced its decision Monday to close down again after the James Bond franchise announced it was pushing back the release of its upcoming 25th installment called "No Time to Die." It was supposed to be released in November, Lauren, but it's now been pushed back to spring."

Magarino: "I mean, it's so tough when you go in and you're like, I already have reduced hours, and now I'm not working at all. What about other movie theaters? I mean, how have they been doing during this pandemic?"

Biek: "All U.S. theaters have been performing poorly across the board, and that's because people in general just don't feel comfortable going to theaters yet. And that, of course, is having a dire effect on ticket sales. It's taken "Tenet" five weeks to gross just $45 million in the U.S. And this is a movie that cost $200 million to make. So it just doesn't make much financial sense right now for studios to release any would-be blockbuster film. So because of this we're seeing studios announce that they're either delaying release states for their movies or they're instead just going to release them digitally. So I really wouldn't be surprised if more theater chains announced they, too, are going to follow Regal's lead and shut down again, possibly until next spring. I think the industry really needs to give Americans a good, long time to feel safe again, Lauren."

Magarino: "Yeah, absolutely. And it just seems I mean, it's not even just theaters, but arts in general. Film music. Uh, in all of these events that take you to a space where you got to be around people, it's just it's not happening. Newsy's Katherine Biek. Thank you."