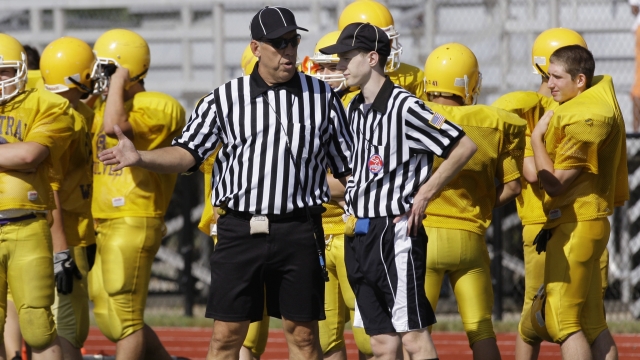 SMS
Referee Shortage Could Put An End To Some States' Friday Night Lights
By Meg Hilling
By Meg Hilling
August 23, 2022
A referee shortage may force some schools to spread referees throughout the week, instead of the usual weekend games.

It's that time of year again: High school football is back in season. But the classic Friday night lights may have to be held on a different day.

That’s because there’s a referee shortage. In Aurora, Colorado, the striped-shirt guys will have to be spread throughout the week.

"They are a vital part of the DNA of all sports, but a lot of these officials, they're just tired of being berated," said Dennis York, head football coach at Hinkley High School in Aurora.

It’s a coast-to-coast problem. The National Federation of State High Schools says over the last three to four years, about 50,000 referees across all sports have hung up their whistles.

"The entire state — we are short, in fact the entire nation," said Brent Rice, assistant director of Michigan High School Athletic Association. "I just got back from a conference. The entire nation remains short of officials."

"The No. 1 reason why folks say they're getting out of officiating or won't go into officiating is because of bad behavior by adult coaches and spectators," Rice said.

"Some of the older umpires that have the experience are just getting tired of it, and they're getting tired of getting yelled at by people," said Gary Diehl, parks and athletics manager in Broadview Heights, Ohio.

When the harsh behavior is aimed at younger game officials, referees have second thoughts.

The Colorado High School Activities Association is promising referees there will be a crack down on abusive fans.

As for the future, the National Federation of High Schools is making a concerted effort to recruit new referees, appealing to people’s community spirit and trying to convince people they'd fit the uniform.