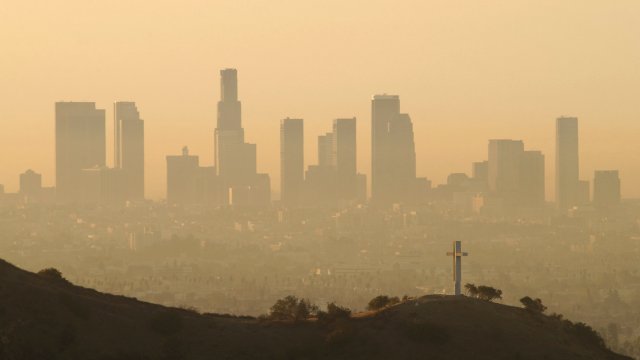 SMS
Study: Cutting U.S. Air Pollution Levels Could Save Thousands Of Lives
By Briana Koeneman
By Briana Koeneman
July 24, 2019
Researchers say, even at levels that are below the current standard, air pollution was linked to an estimated 30,000 deaths.
SHOW TRANSCRIPT

Tens of thousands of lives could be saved in the U.S. by reducing air pollution levels lower than the current standard — this according to new research out Tuesday.

The study, published in the journal PLOS Medicine, analyzed concentrations of fine particulate matter pollution across the continental U.S. from 1999 until 2015.

These tiny particles of pollution mainly come from cars, power plants and industrial sources. They're 30 times smaller than the width of a human hair and can be inhaled deep into the lungs, which can lead to a variety of health problems.

Now, the study found this type of pollution has declined since 1999. But researchers say, even at levels that are below the current standard, air pollution was linked to an estimated 30,000 deaths. Those deaths were mostly due to heart and lung conditions.

As one of the study's lead authors said in a statement: "We've known for some time that these particles can be deadly. ... Lowering the ... standard below the current level is likely to improve the health of the U.S. nation, and reduce health inequality."

The research was funded by the Environmental Protection Agency and the Wellcome Trust.