Teachers Overhaul How Tulsa Race Massacre Is Taught In School 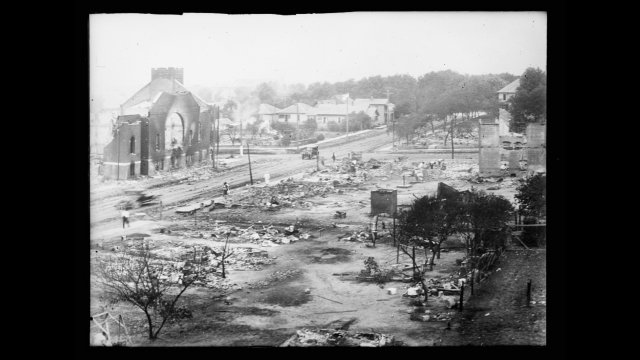 "When I first learned about the Tulsa race massacre, all I learned was what happened," said Emily Harris, a teacher at Will Rogers High School in Tulsa.

Harris is a born-and-bred Tulsan. She's now a Tulsa Public Schools teacher. working to ensure the massacre is no longer a footnote in the history books.

"It's something that brings out emotion and everybody in the classroom and everyone's emotions are going to be different," she said. "One thing that we can say that we're when we're all together is that we're all Tulsan's like this is our community that we're learning about.

The district's new curriculum focuses on the 1921 tragedy, in which a White mob attacked Tulsa's thriving Black community of Greenwood. Teachers rolled out the lessons in May, and Akela Lynch says it's already paying off.

"I have students that will say, 'my great grandfather was a survivor,'" Lynch explained. "So they feel they feel connected to this in ways that they don't feel connected when we're learning about the 13 colonies."

The district will roll out the full curriculum for 1st through 12th grades in the fall. The curriculum won't just be a play-by-play of what happened 100 years ago.

For instance, in Harris'  AP government class the unit "is centered around the question whether or not there is legal standing for the victims and the descendants of the Tulsa race massacre to receive reparations," Harris said.

Fifth graders in Lynch's class, on the other hand, will write their own newspaper articles on the rebuilding of Greenwood after the race massacre and interview each other.

"They also do a mixer where instead of just reading about people, each student is assigned a person and they go around the room and they teach their classmates about that person," Lynch said. "So it's interactive."

It's taken generations for Tulsa to get this in-depth teaching of the massacre in the classroom. Hannibal Johnson said it's overdue and relevant for today's students.

"The core message from this history is a universal one," said Johnson, who is the Education Chair for the Tulsa Race Massacre Centennial Commission. "And it is analogous to the message that we draw from the Holocaust or from ethnic cleansing, the genocides around the world. It is a message about shared humanity."

America faces another national reckoning with racial inequality right now. Lynch and Harris say that was on their mind when they helped design the district's curriculum last summer.

"I think that that's the best thing that they can that I can possibly give them or those critical thinking skills to be able to go out into the world and make a difference in their community and be able to change the climate that we have in this country right now that's so divisive," Harris said.

Their lessons can be a blueprint for how the Tulsa Race Massacre can be taught even outside Oklahoma. But Lynch says this can also inspire other schools to examine untold tragedies in their own backyard.

"I would hope that more districts would look into creating something that is relevant to their city or to their state, because the engagement for our students has been so high because they feel more invested," Lynch said.