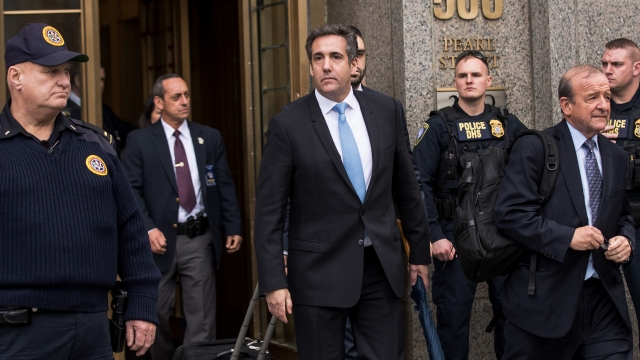 SMS
Redacted Michael Cohen Warrants To Be Released Wednesday
By LeeAnne Lowry
By LeeAnne Lowry
May 22, 2019
On Tuesday, a federal judge ordered that documents related to five search warrants be made public.
SHOW TRANSCRIPT

Warrant materials related to the prosecution of Michael Cohen are due to be released Wednesday.

Between July and November 2017, special counsel Robert Mueller obtained five search warrants related to Cohen. A media coalition comprised of the Associated Press, CNN, The New York Times, Politico and The Washington Post requested the unsealing of those documents.

On Tuesday, a federal judge ordered the documents be made public. They will be redacted to protect ongoing investigations and personal information of people who haven't been charged.

The judge told the Justice Department it must submit a status report by August 22 about whether the redacted parts need to stay under seal.

In March, the government also released a large collection of documents related to the FBI's raids on Michael Cohen's home, office and hotel room.