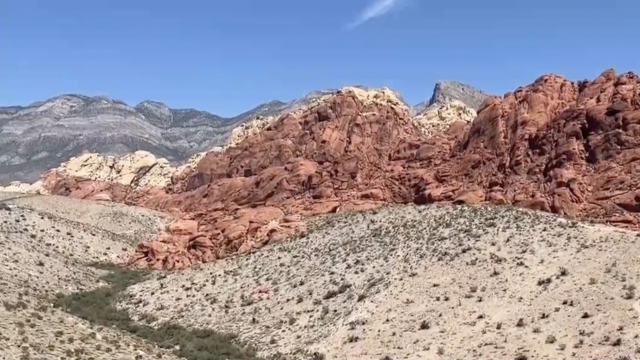 Scientists are trying to create snow in the mountains to save the plants and animals in the dried-out canyon.

The stakes are high, not just at the tables on the Las Vegas Strip, but just a short drive away at Red Rock Canyon National Conservation Area.

"If we don't do something, we're going to be looking at a landscape of dead trees in our national park," said Pauline Van Betten with the nonprofit organization Save Red Rock.

The megadrought gripping the Western U.S. for the last two decades has dried out the canyon.

"The Joshua Trees are drying. The desert is brown," Van Betten said.

And the animals that live in the canyon, like coyotes, are wandering out into nearby suburban neighborhoods, searching for food and water.

"They won't just leave, they'll perish," Van Betten continued. "We have a lot of endangered species in Red Rock Canyon that are supported because this is such a pristine natural area, and they are not going to survive."

The fear is the canyon's ecosystem may not survive the drought either. The marsh lands, natural spring and aquifer have dried up.

Climate change is affecting the U.S. especially strongly in the west. Rivers and reservoirs are experiencing dangerously low levels.

Save Red Rock is turning to the sky for help.

The friends of Red Rock are hoping to seed clouds, not so much for rain, but more for snow pack because it will melt more slowly next year and that will help increase the aquifer.

The Desert Research Institute is partnering with the group to try to increase winter precipitation by 10%.

The scientists will launch microscopic silver iodine crystals into the sky. The water vapor in the clouds will latch on to them it and hopefully, make it snow.

"[The process will] increase the clouds' ability to convert the small particles, small water drops and ice crystals, into larger water drops and ice crystals. So they will fall out as increased precipitation," McDonough continued. "We'll land snow on the higher elevations of the Spring Mountains in hopes that snowpack will melt and recharge aquifers, grounds and springs.

Even if the clouds start dumping snow into the canyon, it's not going to break the drought.

"It's not going to fix the problem," McDonough said. "The problem is the long-term lack of storms and the additional evaporation from the warmer temperatures."

But the snow and rain may be enough to keep the Joshua trees and cottonwoods alive and provide water for the animals until the megadrought snaps.

To donate to the Save Red Rock organization and help fund this project, visit saveredrock.com.