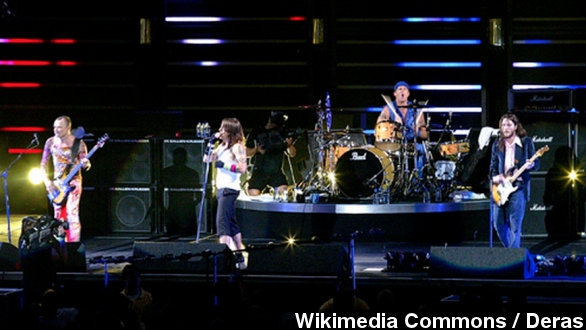 The legendary rockers are just a little more seasoned than Mars. They have more than 60 million album sales and six Grammys under their belts, along with a recent induction into the Rock and Roll Hall of Fame. (Via YouTube / Red Hot Chili Peppers)

Mars is starting to pile up a pretty impressive resume as well. He was Billboard's artist of the year in 2013 and has been nominated for 18 Grammy Awards. (Via Billboard)

Mars went on Fox Sports in September to announce he was performing but was hesitant to give any clues as to what surprises he might have up his sleeve.

He has some stiff Super Bowl halftime competition to live up to. Last year Beyonce invited her former bandmates from Destiny's Child to join her on stage. More than 110 million people watched last year's show. (Via SB Nation)

Mars will no doubt bring out the mainstream pop fan base, and the Chili Peppers definitely don't have trouble drawing a crowd. (Via Fuse)

Joe Flint of the Los Angeles Times writes: "The addition of the group will likely broaden the appeal of the halftime show … and appeal to older viewers. (Not that anyone who listens to the Red Hot Chili Peppers thinks of themselves as old.)"

Older acts have never really been a problem for the Super Bowl. While the group members are only in their 50s, they're more in line with previous acts such as Bruce Springsteen, The Who and Tom Petty and the Heartbreakers. (Via ESPN)

Mars and the Chili Peppers will likely have to dress warmly for their performances. The Super Bowl is scheduled for Feb. 2 in New Jersey. And unlike most of the artists' performance spaces this time of year, MetLife Stadium is outdoors.