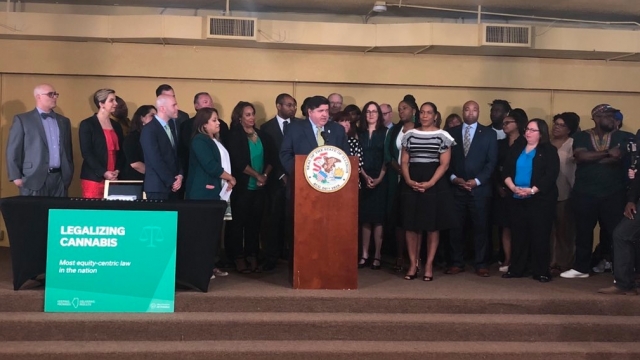 Illinois just became the 11th state to legalize recreational marijuana. Gov. J. B. Pritzker signed the legislation in Chicago on Tuesday. He said it's "the most equity-centric cannabis legalization in the nation, recognizing and addressing the past harms of discriminatory drug laws."

Adults 21 and older will soon be able to buy cannabis at approved dispensaries, which can start selling on Jan. 1 after they're licensed and established. Under the new law, Illinois residents can buy and possess up to 1 ounce of marijuana at a time. Non-residents can have up to 15 grams at a time. However, possession of the drug is still a crime until January.

The new law also means over 700,000 people with criminal records linked to marijuana are eligible to have their records expunged under the Cannabis Regulation and Tax Act.

Twenty-five percent of marijuana tax revenue will be invested in impoverished Illinois communities.

One of the bill's sponsors, Rep. Kelly Cassidy said, "Today, we're hitting the 'reset' button on the war on drugs."

Legalizing marijuana was part of Pritzker's gubernatorial campaign. He said the drug could bring in between $800 million and $1 billion in tax revenue annually. But Cassidy and the bill's cosponsor, Sen. Heather Steans, say it will bring in closer to $58 million in the first year and up to $500 million a year within five years.

Cassidy said the state's 55 medical cannabis dispensaries will get first dibs on recreational licenses. If all of those dispensaries apply for licenses for second locations, Illinois could have 110 outlets by the time legal sales start. Applications for up to 75 more dispensaries will open in October, but the state will conduct a review before it licenses any more.