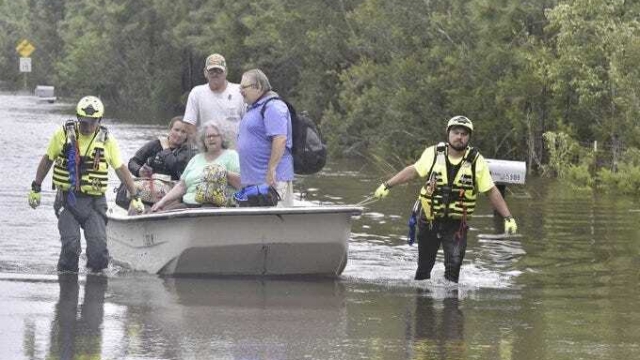 Lauren Magarino: "This morning, tens of thousands of people are still without power after Hurricane Sally made landfall Wednesday. Two people have been killed by the storm in Alabama and Georgia. Residents are trying to pick up the pieces after the slow moving storm brought heavy rain, wind and massive flooding. Many homes and businesses damaged. Rescue efforts are still underway as first responders try to find people trapped by the flooding. Like this woman in Cantoment, Florida. She wrote on her front door "In attic. Help." She says fire trucks and rescue vehicles kept passing her home until a firefighter on a jet ski heard her husband whistling for help.

Elaine Hulgan: "I mean seriously when they kept on going by not seeing us, I told Jack. I said, 'Jack, are the four of us gonna die in this house?' Because, you know, we could just see the see that's how high the water got."

The couple says they will file insurance claims to deal with the damages to their flooded home and cars and try to find temporary housing. They say they do not know where they'll live while their home is under repair, but they are thankful to be alive. Newsy's Katherine Biek has been keeping us up to speed on the storm recovery effort. She joins us now. Katherine, do we know how much it's going to cost to repair the damage caused by Sally?

Katherine Biek: "So those damage estimates are put together by local and state officials, and they're just starting to trickle in, Lauren. In Florida, in Escambia County and it's hard hit city of Pensacola, they are already estimating that Sally caused at least a combined $29 million in damage. That area got about 30 inches of rain in just four hours. That estimate is expected to grow as the floodwaters recede and the county is able to assess more damage. Now, in terms of recovery efforts, rescues are still the first priority right now. Mandatory evacuation orders were not handed down before the storm hit in some of the worst affected areas. So many people decided to just ride out the storm, thinking it wouldn't be that bad. And because of that, the Florida National Guard and other first responders helped rescue an entire neighborhood of over 300 homes in Escambia County, and at least 85 people living in a Florida assisted living facility were also moved to a different location because of power outages. And similar rescues have also been happening in Alabama."

Janice Sullivan: "My daughter and I will leave from now. Definitely. No matter if they say if it's a rainmaker or not, we're leaving, Yeah."

Biek: "Running after airlines halted flights ahead of the storm, but one major concern is still all of the power outages. Roughly half a million homes in Sally's path still don't have their power back on. And while utility companies are working to fix that, Lauren, no one has a timeline yet for when the work might be complete."

Magarino: "And that's the most difficult part is the unknown. Unknown of how long it might take to get that electricity back up to get, you know the damage is cleaned up, and especially just looking at that house, um, that we saw a little earlier and all the debris that was in there? I mean, it's just it's devastating, and it's so hot. Newsy's Katherine Biek. Thank you for this update."