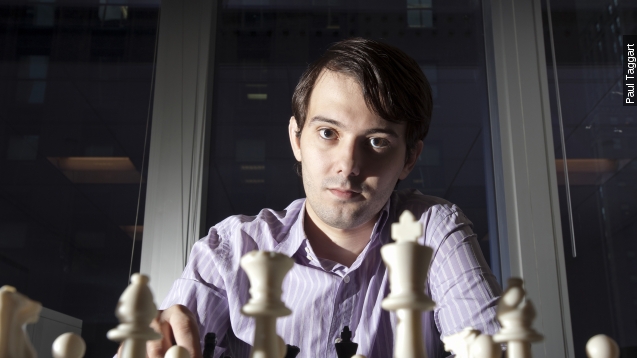 SMS
Record Label Cuts Ties With CEO Accused Of Hiking Drug Price
By Ethan Weston
By Ethan Weston
September 25, 2015
A punk label out of Brooklyn is breaking ties with Turing Pharmaceutical's Martin Shkreli after he hiked the price of a drug around 4,000 percent.
SHOW TRANSCRIPT

Controversial CEO Martin Shkreli is back in the news. That is, if he ever left.

Shkreli, it turns out, was a silent partner in a minor punk label called Collect Records, which has now decided to cut ties with Shkreli after the recent controversy.

Founder of Collect Records Geoff Rickly said in a statement that the label and its artists have "agreed to fully sever our relationship with Martin Shkreli, effective immediately."

The big controversy that sparked all of this started when Shkreli's Turing Pharmaceuticals bought the drug Daraprim — which had been on the market for decades — and jacked up its price by about 4,000 percent.

Shkreli initially defended the price hike saying the company intended to use the profit to research other drugs meant to fight toxoplasmosis, but backed down after widespread criticism. (Video via Bloomberg)

"We've agreed to lower the price of Daraprim to a point that is more affordable and is able to allow the company to make a profit, but a very small profit, and we think these changes will be welcomed." Shkreli told ABC.

That announcement likely came too late from a PR standpoint. PhRMA, the powerful drug industry trade group, distanced themselves from Turing Pharma in a tweet.

All of this has had far-reaching effects and not just for Shkreli or his company. Collect Records admitted cutting ties with him might mean the end to their label.