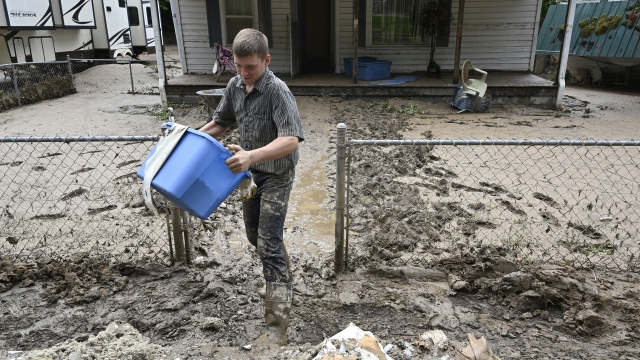 SMS
Record Flash Flooding Kills At Least 25 In Eastern Kentucky
By John Mone
By John Mone
July 30, 2022
In Fisty, Kentucky, residents returned to their flood-ravaged homes on Saturday to clean up and salvage what they could.

The area is in clean-up mode, but some smaller communities still need help finding the lost and recovering those presumed dead.

In Fisty, Kentucky, the town is just beginning to clean-up.

"I've lost so many neighbors, my next-door neighbors just across the creek, their whole trailer washed away," says Angela Ritchie.

Up and down the river forks you see washed out Appalachian towns; the storms swelling creeks into torrents; rural Knott County took the brunt of damage and death. Hubert Slone picked up what's left of his daughter's trailer home, and said her neighbors lost all four of their children in the floods.

"She tried to holler at them, and they couldn't hear because of the roar of the water. She saw them get on the top of the house; it came down here, hit her trailer and all went down into the creek," said Slone.

Kentucky's governor says the death toll from floods has surpassed two dozen and is likely to grow.

Northward in Hindman, Kentucky, the deluge caked the town of 700 in river mud.

The mayor pointed out properties of his own, totally destroyed, remembering those killed.

"All three of those confirmed deceased, all three were friends of mine," said Neice.

On the main street people get a hot meal, water, and cleaning products.

"The most difficult thing for us to deal with is the loss of life," said Pastor Mike Caudill of Hindman First Baptist Church, as he provided spiritual assistance.

The sense of loss palpable in this town, as well as actual pieces of mountaineer culture.

"If it has strings on it, I've made one or two at least. Dobros, mandolins, ukuleles," said

"The amount of hours is the devastating thing. I came the first day after and I just had to go home. I just couldn't take it in," said Williams.

This is the latest string of catastrophic rains that pounded parts of the U.S. this summer, and scientists warn climate change is making weather disasters like these more common.